Algomaster review exposes the truth about the Algomaster System Scam

Algomaster System is an autotrading software meant to make up to $15,000 weekly for you, at least as claimed by the alleged founder and CEO. This binary trading option is new, it can be convinced that it is legitimate and hurriedly invest your money with it. There are complaints all over the internet from investors who invested with this software and lost all of their investment. So don’t be fooled because it is new and highly spoken about by fake CEO and founder. 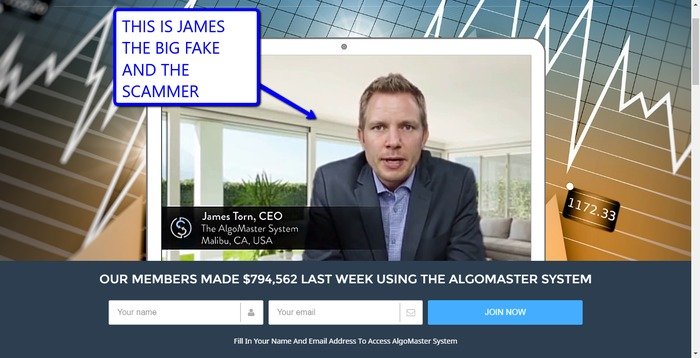 During the video presentation the alleged CEO who also calls himself the founder of this company says that the company is registered and is bases in California, USA. He adds that the binary option method is a robot that was solely made to make money for you, to be precise $15,000 weekly automatically. The above claims concerning the company is a fat lie. Searching using Google search engine no such company exists nor does the CEO himself. Would you like to throw away your money to a company and a CEO that doesn’t exist? I bet you don’t. Don’t be lured by the fake weekly profits too.

The alleged CEO is saying that the robotic system recognizes opportunities in the market that are at least 94.6% accurate. This means that it is a zero risk system that guarantees you success and nothing less. This is also a lie. No system has ever been this accurate, the experts in the field can attest to this. These are exaggerated figures to convince you to invest with them. Don’t even dare. Your money will vanish as soon as you deposit it just like that of the previous investors.

James, the actor in the video is saying that they are looking for 50 more participants and you better hurry because the spots are limited. If he needs only 50 more participants he should have recruited them from California where the company is based, why put this over the internet, if not to steal from innocent people just trying to get an extra coin.

The video presentation is full of testimonials. Speaking of how they are benefactors of the application. They say that all is guaranteed and investing with the application is the best choice you could ever make. This is contrary to what the internet says. First of all there have been complaints about initial investors losing their money. Also, these are paid actors working a lie to earn $5. They are ready to say anything on the script as long as they get the $5. Don’t believe these fake testimonials. They are misleading and will make you lose money if you listen to their lies. Keep off and be safe. 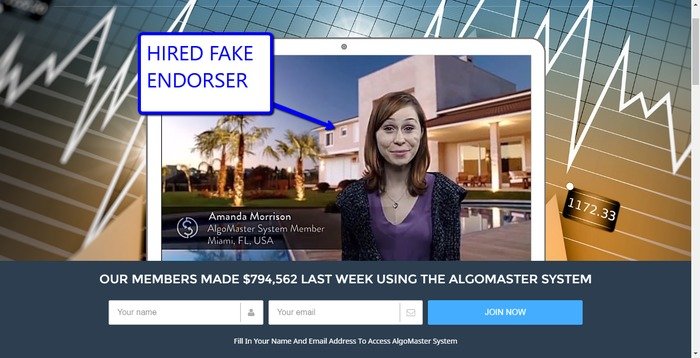 We also found random images taken from Stock.com manipulated to make the people in the images seem like real testimonials. Don’t be convinced by these fakes which work for the cyber criminals and hackers behind the scenes. All reputable blogs are talking negative about the system, the number of investors who lost their money and couldn’t reach anyone to enquire where their funds vanished. The money disappeared and can’t be found. 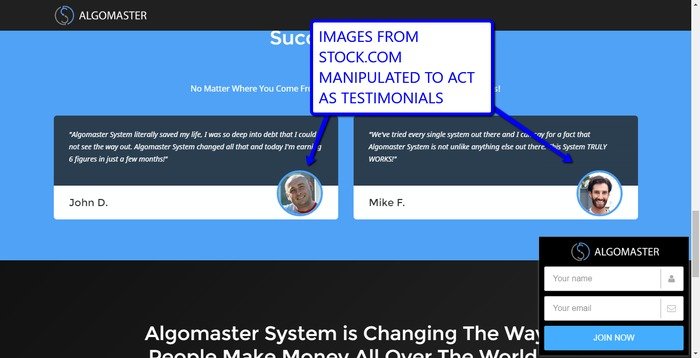 How comes a big company like this has 1341 members only and making $181,467,329 in profits. These are made up profits meant to distort the thinking of the newbies and make the drool over the cooked profits.

At the bottom right corner of the web page of the alleged big company there is a box that is there not disappearing, asking you to sign up. This is a nuisance and meant to lure you to be a part of the scheme, except that you will lose your money. Don’t even dare input your information for you will be receiving nuisance emails now and then.

Who is CEO James Torn? 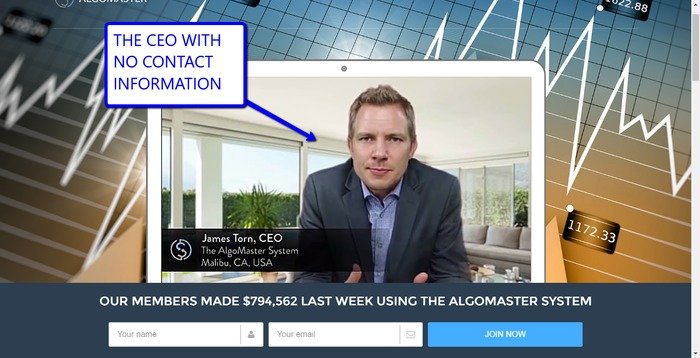 James is a mere actor, hired for $5. So cheap to be a CEO of a company. He does not exist as a CEO neither is he available on social media platform. He is just a lie, a fat one.  He talks of a company that doesn’t exist, and the multi-millions he is overseeing.

Is Algomaster System a Scam?

Yes, Algomaster System is a scam. The above mentioned and thoroughly explained proves confirm it. This leaves us with no choice but term the system a scam and fake. We therefore blacklist it and warn you against it.

Having been convinced by the above provided information about the fake software, company and CEO it is better to avoid the tricks to avoid being a victim just like the other investors who lost their hard earned money over a money making scheme. This just like Insured Trading and Methodox is a big Scam.

Verdict: Algomaster System is a Scam you should avoid