Big Banks Method is not a binary or Forex trading option as claimed by the fake CEO. We will later see in our review that Big Banks Method is actually a binary trading option. The alleged CEO is just trying to alienate himself from binary trading option for many of these are scams and he is not an exception though he is denying. He only wants to get more clients and more deposits. This is a fishy and suspicious method of attracting others to invest with you. This system is bogus and wants your money. Don’t believe any word from the actor for he is an endorser of the scheme.

Aaron Davis claims that Big Banks Method uses derivative Market which is the financial market for derivatives and financial instruments like future contracts or options which are derived from other forms of assets as explained by Wikipedia. Here the alleged CEO is trying to convince you that his methods of trading are different and more credible compared to other methods. Be informed that this is not true for we have seen earlier in the review that the allegations that he is not using binary trading option are not true, dont be fooled by his sweet lies. He is interested in making money for himself not for you. 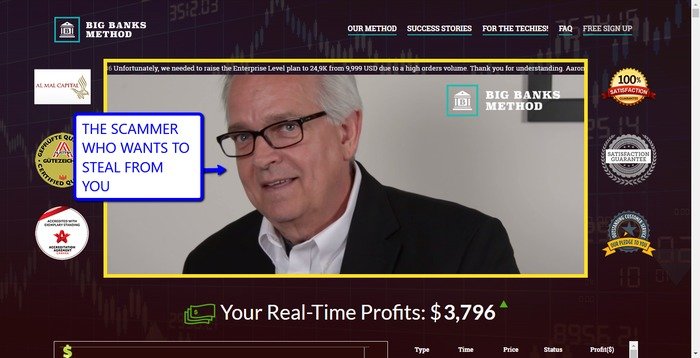 The method is said to be automatic and can make you good money in a matter of hours. In the presentation video we are shown that the software is working in real time and making profits for the clients. However, when you look closer at the figures you will notice that the figures are static, there is no increase in profits, the figures remain the same. This tells us that the numbers and the working of the software are all cooked to fool you. Keep your eyes open to see such ambiguity.

Davis claims that the software has a 90% accuracy on a daily basis. Meaning that you are guaranteed profits daily. This is unrealistic for Big Banks Method System. No binary option trading application can be this accurate. He is presenting us with unrealistic numbers for his convenience. Don’t listen to any of his lies. He wants quick money from you. You worked hard for that money, I bet you don’t want to give it to some stranger claiming to be a CEO. In addition such accuracy will attract the attention of big names in the business industry and will be all over the internet. The opposite is true here. Searching on the internet only brings negative information about Big Banks Method and no news outlet has in its archives information about this bogus and fraudulent system. 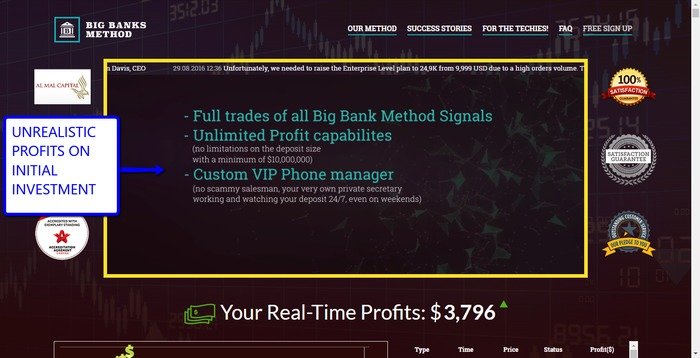 From the website of these thieves you can see they have proudly written results of the past five years which falsely shows a chart illustrating the upward growth in their profits forgetting that their website was initially registered on 26th October 2015, as seen on who.is, a domain-age checker that is approximately a year ago. The question is, where did these results for the past five years come from? Most probably cooked or stolen from the internet.

The alleged CEO explains that the they have a medium plan subscription which is $2,999 a month and a minimum investment of $10,000 ONLY. This is alot of money already. They want you to blindly entrust the sum of money to a total stranger pulling an act over the internet? Don’t dare throw your money away for that is what Davis Aaron wants in the name of an investment.

Davis Aaron has gone an extra mile and tried to convince us that his legitimacy is valid. He brings forth testimonials. He is not clever enough for a search on the internet show that these are random stock photos downloaded and attached to fake names. He tried his best I guess; unfortunately he is not smart enough. Stay away from the dumb CEO. 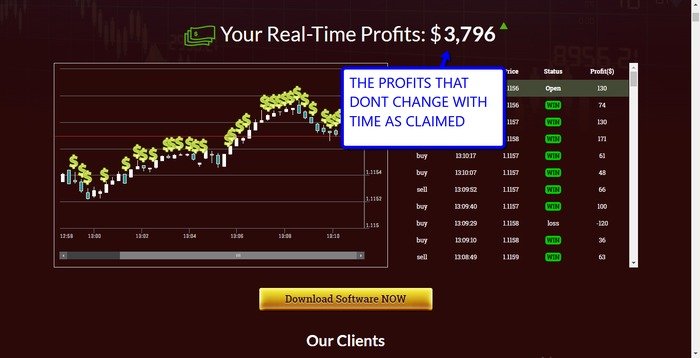 Who is CEO Davis Aaron??

Davis Aaron must be a hired actor for the website tells nothing more about him neither is he on important platforms like LinkedIn and the rest. I mean isn’t it obvious for a CEO to be on social media selling the brand of the organization. This leaves us with no choice other than to term his as a scam hiding his trails so that when your funds disappear you won’t be able to trace his whereabouts.

Is Big Banks Method a Scam?

Yes it is, a big one. From the above stated and well explained proves we can conclude that the entire thing is a scam and must not be given any attention.

Big Banks Method System is trying to justify itself from binary trading options or Forex technics, this tells us something, it is a scam trying to separate from other scam methods used by common scammers. Don’t invest with the system and be safe.

Verdict: Big Banks Method is a Big Scam in my opinion

Hopefully I have saved you from losing your money with the Big Banks Method scam and if I have please consider SHARING this post to help warn others about these scammers. I also keep a list of the systems that have made me real money and you can check them out on my Trusted System List.