The compound Trader app by a guy named Dr. Albert Henderson is a brand new and viral trading app released onto the market just a few days ago. This binary trading system just caught my attention yesterday after receiving several emails from some of my readers who claimed that they have lost a lot of money after trying it. In this compound trader review, I have uncovered damning untruths, bogus claims and outright lies which will confirm that this binary trading software is a dangerous trading app that should be avoided by all means. So if you`re an investor or a looking for a reliable service to invest ,I suggest you hold your horses until you read my unbiased and honest review

Listening to Doctor Albert Henderson, the alleged owner and chief presenter you would think that we are dealing with company that has been in the market for 7 years. On top of that he asserts that it has taken him these number of years to create and fine tune his system to result in a robust and error free system that can churn turn out atleast $770 hourly,$12k daily-something he says has been proven by his beta testing group for over 6 months. To make the presentation even sweeter to his audience and new day traders, he claims that by opening an account with compound trader, you and I will only be seconds away from having a life of untold riches such as endless vacations, expensive cars and mansions just to name but a few. Sadly my investigation on the compound trader production, pitch and the entire presentation, I found nothing but a wave of deception, lies, bogus claims all which are weaved with fake time counters, fake and stolen identities among many others. Let me just show you how. 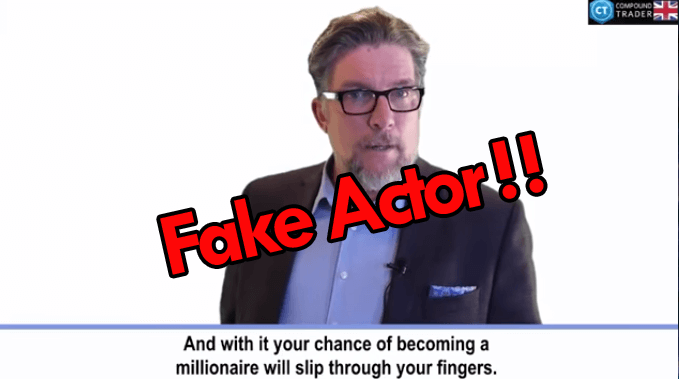 I have to start with Dr. Albert`s lame narrative and storyline which helps to immediately trigger the first red flag that compound trader should not be trusted or relied on even for a minute. His claims that his system has been around for seven years and that it has been tested for the last six months is a sick lie given that the domain for this dummy app and website was only registered only 5 days ago. Secondly his bold claim that his system is able to make at least $12k daily is very unprofessional, misleading and outright unfeasible. Likewise his assertion that this system which uses reinvestment algorithm and strategy to deliver such massive results with an ITM ratio of over 98% smells of horse manure. If you have been in this industry ,you should be aware that such results cant be achieved even with the help of the best binary trading software in the market and on top of that people making such unprofessional claims should be sued or probably shot for misrepresentation-have no place in this industry!!!

This looks like just another copy of the GPS Trader which scammed alot of people a few months ago. Check out the screenshot below of the testimonials on both sites which are identical. The 2 sites are also very very similar so in my opinion this looks like a relaunch of the GPS trader scam under a new name. 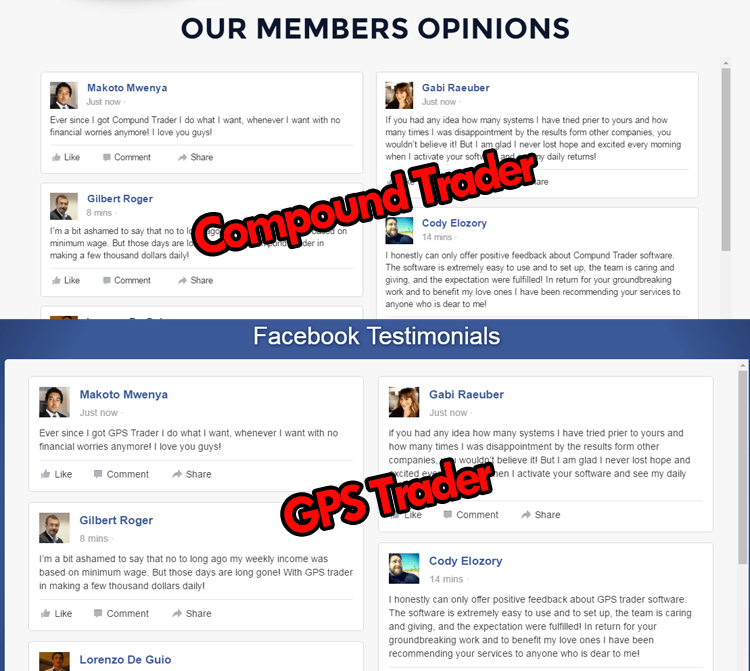 The other serious red flag that just can’t be wished away concerns the alleged owner and the presenter of compound trader. The guy is not known in the binary marketing and trading world and there is nothing about him on the internet . No LinkedIn, twitter or Facebook profile. This is a clear indication that Doctor Albert is just a coined up name and character hired to execute this evil and dirty job.

Finally, I have to say the scammers behind this app and Doctor Albert all look very desperate and are probably in a financial hardships going by the way Albert beseeches and urges people to sign up with his awful system. That’s just pathetic!!!

Conclusion From My Compound Trader Review

If you had entertained the idea of investing in this binary app or thought that compound trader by a Dr. Albert is your ticket to financial freedom, then you will be disappointed to know that this dummy trading app is a money pit which will leave you reeling in financial difficulties for many years to come. As you have seen in my compound trader review the whole crap presentation is full of bogus claims, incriminating statements, outrights, fake identities, all hell bent in tricking you to deposit your hard earned money. For your own sake and that of your family, stay away from compound trader by all means

Also don’t forget to check out my tried and tested signals list if your looking for something that works.