UPDATE – This scam has been relaunched under the name Dream System now but be warned it is still a scam.

Dream profits system, a viral binary trading service released by a certain Mr. Matthew Warner just a few days ago is already eliciting numerous complaints from the people who have tried it. To save you from losing money, I sought to find the truth behind this over the radar trading system and what I found will shock you.

Presented by Matthew Warner, an alleged 49 year old, successful Wall Street trader worth around 27 million dollars, dream profits has all the elements of a bogus binary trading scam. Here are the reasons why

Proof that dream profits is a Pure Scam

On visiting the official webpage of dream profits, I was welcomed by a Mr. Mathew who claimed that he is a retired inventor who invested his own $1.2 million dollars to the development of dream profits system now open to just 15 people around the world for a lifetime license for today only. What caught my attention though was his ridiculous claim that whoever got into the system would have an opportunity to make $4250 daily doing nothing! To the contrary, in the binary trading market, earning $4250 with a manual or an automated trading method does not exist. Secondly  Mathew failed or ignored to mention that his app is a binary trading system but instead chose to say that by filling a certain survey you would automatically receive the $4250.In the current  economic environment money does not come free. Not in this world!!

After going through the pain of the 30 minutes + presentation I was left with no choice but to reveal that dream profits is either a poisonous scam, the presenter is high on something dope than just the normal pot or he is an actor who sold his precious soul for just $5 Whatever he is presenting or proposing in that awful video just can’t’ add up!!Without prejudice or malice the whole dream profits saga is nothing but pure fiction. Let me dig into the details.

The statement that his dream profits app never loses a trade just can’t cut it in the binary trading market. The idea that you will make free/risk free money is not only misleading but incorrect not even through his algorithm called Rapid Counter Measure. Binary trading is a highly regulated market which is also highly influenced by external factors. Just like other binary trading scams, Mr. Mathew doesn’t show us how his clever system works or how it pulls those magical numbers. He is only interested in showing us how successful he is through fancy drinks, an expensive boat and the water scenery .All this resembles a typical scam. Next the claim that the system is only accepting ONLY 15 people today just doesn’t add up. I’m dam sure if you visit the website tomorrow you will find the same claim

To further proof that Mathew is nothing more than a lousy scammer and charlatan I sought to find out if his is real. You will agree with me that a person who has been in this business for that long; a person who has made over $27 million dollars in binary trading should be an industry authority whose details should be easy to locate on the internet. Unfortunately when I tried looking for his details via a search string “Matthew Warner” the results just point me to dreamprofits.co stuff/reviews. This only confirms that Mr. Mathew is not real or is just an actor who is not honest at all. The guy must be cussing right now because all what he can show for is a boat ride and the 30 minute -lifestyle he was offered during the filming!!

Interestingly, despite all this under-the-radar successes, the domain for dreamprofits.co was only registered a couple of days ago which is further proof that what the alleged ceo is presenting is just bogus. Otherwise how could he be making so much money for his beta testers and himself yet the system was launched the other month

Now onto the beta testers. The images used for these people are just fake or stolen. For example take the images for Anita and Neil .These images are actually stock images copied from another binary trading scam, www.98sucess.co. Its even funny that Anita and Neil are named Lena Bailey  and Carolyn Barber  on the 98sucess.co. See the proof below. These are the two images found on this site 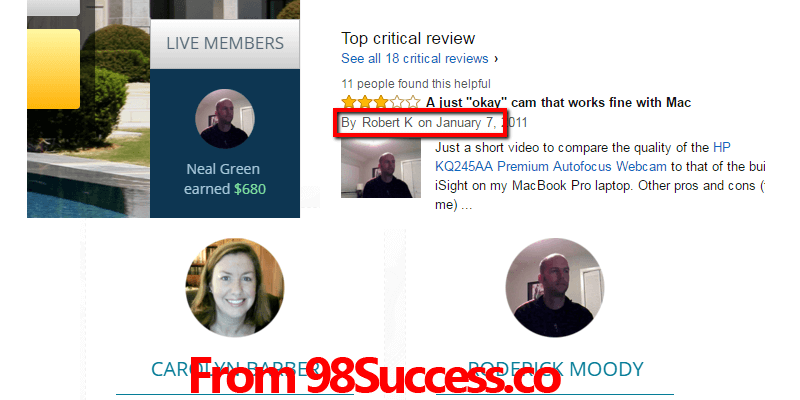 Now visit 98Success.co and check out if you can see the same images

Right from the Mr. Mathew`s inability to prove how his system works, the use of fake identities, unjustifiable binary trading claims all the way to un matching  launch dates, I have every reason to believe  that dream profits is  a dangerous scam aimed at scamming   both novice and day traders. You are better off not investing your money in this misleading system

Verdict: Dream profits by Matthew Warner is one big rip off!!

Also check out my trusted signal services and trusted brokers and stay safe.