Imagine making $500 after every five hours. Well we imagined it too and so far it is still an imagination courtesy of Dupli Cash App. This is a fake trading app being marketed by scammers all over. The Dupli Cash App review is here to verify everything factually and objectively.

CEO: None Given
Official Site: duplicashapp.com/dream-original.php

Dupli Cash App is a binary options software. According to the claims made by the presenter in the video, the robot is focused on social network trading. Just so you know, the video presenter goes by the name Edward Mason. He is the guy who “ helps” traders to be able to make $500 every five minutes. Now the contradiction comes in when he says that the software enables users to make $2,000. $500 every five minutes surely should bring in more money.

Now every good scammer has a story. Edward also tells us his. Initially he was a restaurant manager. This job was draining him physically and financially. He eventually got fed up with the fact that he could not pay his mortgage or service his loans. He decided to seek a way out. Thanks to him seeing a high school mate post on socialia a picture of a car he had bought, h got into the world on online trading. The friend in question here is referred to only as Steve Van Der. we did not find him on social media and therefore we believe he could be an imaginary friend.

If you are looking for online investment options please rule out this app because it has not been tested or tried.

The scammers behind this app say it is based on the use of social media so if you spend most of your time on social media networks you are bound to make profit. How much? You are guaranteed to make $1,000 daily. In Fact you do not require any skills you simply follow the more prominent traders.
Now trading is a serious business. You do not engage in business without information. Do not be cheated by the so called prominent traders. These are actors paid to pose, speak and act like they are living it up so as to convince you.

So who is the person behind this scam? Well we do not know. Edward is the face of the system but he does not let us know who his boss is. As for the testimonials they are all fake. Stock photos taken from the internet and posted on the site. The Facebook posts do not lead to Facebook. And how come all the users have the same naming formula? Or how come no user has a nickname since it is quite common to see people use nicknames on social media. 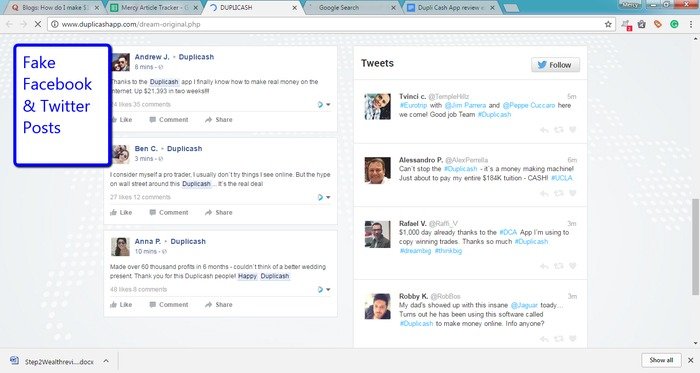 As you go through the site you will notice that you are notified when someone withdraws and makes a profit. There is no notification of losses. This means that the scammers want you to believe that their app has an accuracy ratio of 100%. The other thing is the rate at which withdrawals are done. Most trading platforms have a system of withdrawal hereby traders wait an average period of two weeks to be able to withdraw yet here it is after every minute.

It is such a shame that Edward and his team of scammers cook up a lie and expect people to believe it. Seriously how can you make profits in trading by just copying trading positions from other “ prominent” traders? Clearly the person who cooked up this scam did not do their research or they are too desperate. 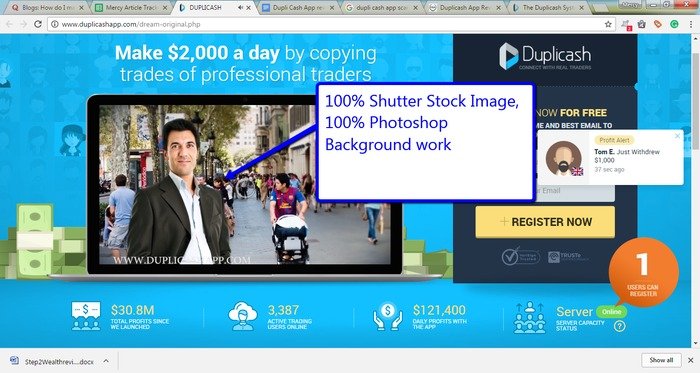 We do not know who the CEO of Dupli Cash App is and we also doubt if he truly exists. This is just acting to sell a lie. Edward is the main actor playing the leading role. We wish we could have better news but all we can say is turn back before you act on the lies. Edward himself does not even exist on the social media platform that he purports to be sharing success stories from.

Did you know that Edward himself does not know that he goes by that name? He is actually a shutter stock photo titled handsome business man.

Is Dupli Cash App  a Scam?

Yes Dupli Cash App is a scam. It could be going viral due to its so called dependence on social networking but watch out. Guaranteed Money System, Profits Ball and CFD Society

Kindly put your money to good use by avoiding this system. We cannot say much about it because it is a huge lie from the word go.

Verdict: Dupli Cash App is a scam so avoid it