It appears as though the season for Brexit or EU exit has not yet gone. Released just a couple of days ago, EU Exit system is another dirty scam riding on the wave of Brexit referendum conducted in Britain a few months ago. In this review we are going to expose all the dirty tactics and maneuvers employed in this production so read on to avoid being caught.

Scam Proof From my EUxit Review

On visiting the official website homepage of EU exit I was greeted with nothing but sheer scam tactics employed to great length to deceive honest and unsuspecting members of the public in an effort to steal from them. To these morons it may appear plausible that EU Exit could exploit the instability brought about by post Brexit but in spite of the cunning promise that even new day traders might be able to spin healthy profits, the truth remains that the EU exit app is just another low rent scam .With additional effort behind this scam these morons could have pushed it further forward but the sad truth is they have followed the typical stale formula. 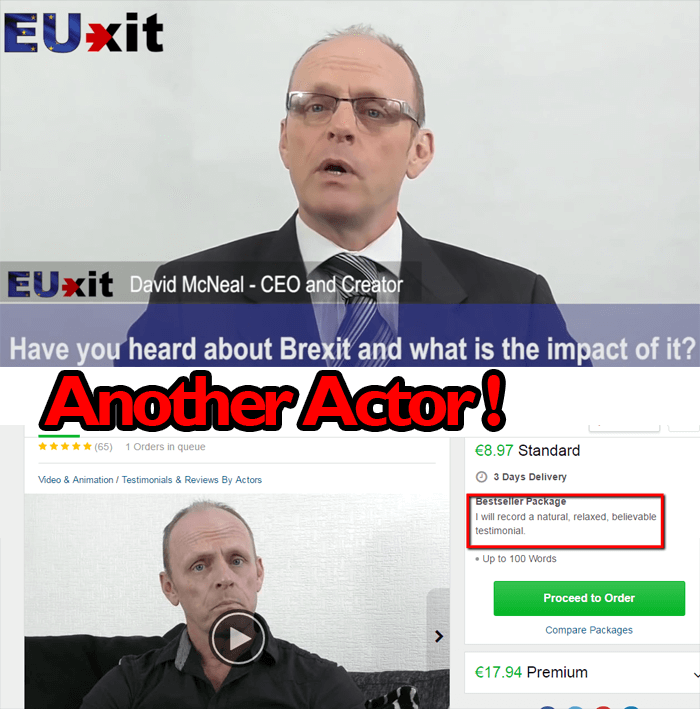 McNeal the man who claims to be the owner is the first point where the scam  begins to unravel. This moron who has appeared in several scam presentations that begs the question as to why the need  to employ  a lowlife to play this role. Clearly this is because David McNeal is camera shy, nay it is because he does not exist

You don’t  need to swallow the spiel that Mcneal is a seasoned investor who has made millions through his  trading knowledge. The fact remains that there are no credentials to proof  that he is indeed an investor given that you will not find any info about him anywhere on the internet  except the many negative reviews about his fake software

Any one serious about online trading should always ask and verify as to who is behind the trading software. All of the legitimate softwares which are scam free go to great length to be as open, honest and transparent as possible. They try as much as they can about their operations and sadly this cant be said about EUxit software service

On checking the Euxit software for legitimate testimonials, all I found is the same morons who attempt and endorse this software which is allegedly making over $200 k and claims that you are only a click away from making serious bucks. This app, which copies clips and images that featured  the former mayor of London who engineered the Brexit has clearly faked all the testimonials.Sadly even the profits made by these fake traders are quite vague and there is no info on how their fortunes were made in terms of days and years  and instead deliberately focuses on repeating how easy it is to earn money with zero efforts

The great claim behind the Euxit software is that due to the volatility of the EU post the Brexit, the markets can be exploited to generate huge profits. Of course this crap software is restricted to a few number of people who will have the opportunity to make serious bucks once they make a deposit. Besides McNeal has invented the Euxit software in collaboration with mysterious math gurus and stock market traders but there is no proof to confirm this. The biggest claimed is that you don’t  need to interact with this app in order to make money with this app  as it will win trades for you all the time while you sleep .What a load of bullshit!!

As you have seen, euxit system is a low rent app that is being employed to play mind  games on unsuspecting members of the public. Aside from the clear absence of deep  comprehension  of the vowels such as the E, this software  is a lazy scam that should be avoided by all means. This clap lacks legitimate testimonials, even the guaranteed profits are fake, free access, limited edition badges, bonus offerings are all lame tricks and lure traders to register through pure deception and with haste

Verdict: Euxit Software Is A Lame Exit Scam That Should Dumped To The Dustbin

I’ve reviewed 100’s of systems now and 99% of them have just turned out to be complete scams. I have have found a few that have actually made me money and you can check them out on my tried and trusted list here