EverGreen Formulla is a new binary options software just launched or I should say re-launched. With the rise in binary trading the system has been the trend of money making. Others, especially cyber criminals and hackers have taken advantage of the situation. They hire amateur actors from Fiverr.com to endorse their scam. EverGreen Formulla is one among a pool of other scams used by criminals to siphon money from newbies in binary trading. This review exposes the impossibilities, cooked numbers, fake testimonials and a CEO that doesn’t exist. EverGreen Formulla is a replica of its previous scam called Greenwood Formula. Don’t be convinced by the new name it is a scam just like it was previously under a different name. This gives you enough reasons to term EverGreen Formulla a scam.

My Evergreen Formulla Video Review below

The alleged owner of this fraudulent software promises newbies a lot. This makes us suspicious and ask a million questions. This is a rebranded scam. It uses the same video under a different name. As a matter of fact the same CEO with same empty promises.

He talks of enormous sums of money. Money that is almost impossible to make in a year for a normal business person. Jake Orton says that he is going to take you by the hand and guide you to make hundreds of dollars in the coming month. He adds that the money is guaranteed and if the unexpected, which is losing the money happens he will pay you $10,000 from his own pocket. This is untrue and unreliable information. First of all you are a stranger to him, he knows nothing about you and you know nothing about him. How comes he will pay you off? 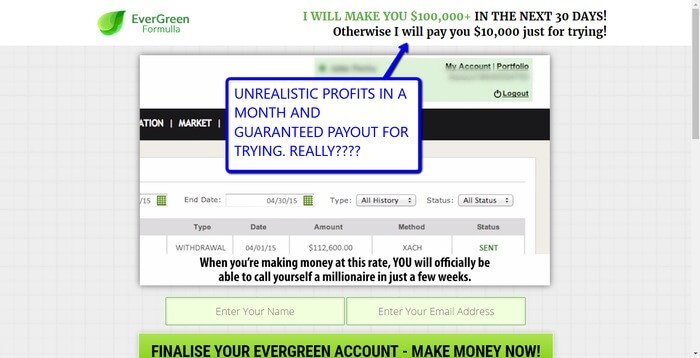 You don’t need much to start your investment scheme, $250. From this amount as said by Jake Orton you will reap off hundreds of thousands of dollars. These are unrealistic figures compared to the amount initially invested. In the binary option industry it is impossible to make such a sum from $250. This is just a way of pulling you towards investing your money with Jake Orton who will vanish with it as soon as you deposit it.

The alleged CEO is just an actor. He was hired by cyber criminals to endorse the scam. Everything he says is rehearsed. Don’t believe a single word from him for he knows nothing to do with binary trading option. He is a self-claimed millionaire for the sake of the promotional video. He is just pulling an acting gig and could never make you a millionaire as he claims. Instead he will make you poor if you give him your money for he will eventually disappear.

There are cooked profits under pictures stolen from the internet. When searched from Google search engine we find that most of these images are stock images and the captured people know nothing about EverGreen Formulla. The video uses random numbers as profits made by the fake members. Steven Eartrum for instance made over $700,000 from an initial deposit of $1500. To prove this organization is not genuine why fake profits and steal stock images? This is a serious crime, using other people’s images sans their consent. These images leaves us with fake members and fake profits. Stay away from this organization with fake members or you will just be a statistic.

The website welcomes you with a pop up window which wants you to register. This is a clear scam and doesn’t need rocket-science to establish this. Why are they so pushy if it is a genuine thing? They want you to invest with them and disappear with your money before others alarm you that this is a scam. Stay away and be on the safer side.

From the video you can see bank accounts screenshots. The people under the names of the screenshots brag how they easily made the hundreds of thousands in the first month. These are fake screenshots. You can easily manipulate the original ones using Photoshop. In addition it is impossible to make such hefty amounts in a month. Don’t be lured by these fake and illogical figures you will invest in something that will never make you such amounts instead steal the small amount you invested.

Use of staged testimonials. These are hired actors especially from Fiverr.com . Usually hired at meagre amount of $5. These testimonials falsely speak highly of the application and how they have benefitted. Don’t fall for any of these lies, they are paid to lie and if you accept their lies you will lose your money instead of making profits and the $10,000 guarantee pay out by the fake CEO will be nowhere to be seen. 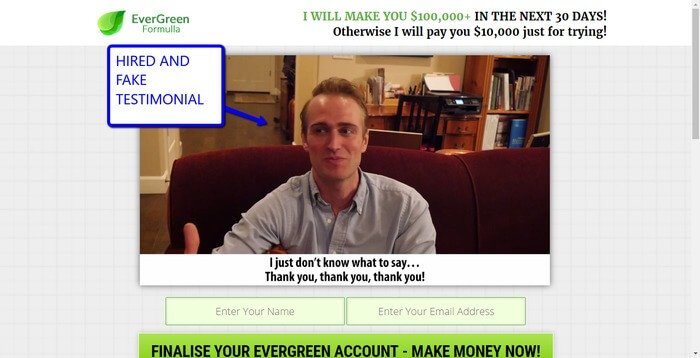 Who is CEO Jake Orton??

Jake Orton is a mere actor who not only appears in EverGreen Formulla but also in Greenwood Formulla a predecessor of EverGreen Formulla which I reviewed here. No information is provided about him on the website giving us enough reasons to term him a scam who leaves no trace of himself behind. 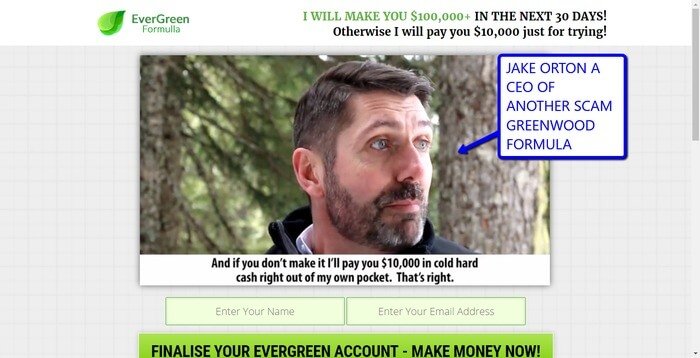 Is EverGreen Formulla a Scam?

Yes, it is a scam. Full of false promises, fake figures, stolen stock images and a hired CEO and testimonials as seen above. Staying away from their nuisance emails and investing with the software is the best you could ever do to your hard earned money.

EverGreen Formulla Scam is a lousy software specifically crafted to steal from you. A scheme made to make money for cyber criminals. We officially blacklist the site which is full of pop outs and irritating messages. Keep your money safe and don’t disclose any information about you or your finances to them.

There are still way to many people falling for scams like these so if you have a few minutes please SHARE this post to help save others from becoming victims. I also keep a list of any system that makes me real money in my Trusted System List which I also recommend you check out if you are looking to make money.

Any questions at any time just let me know.