Scam review: Fin tech is a deliberate and dodgy scam

Before you decide to invest your money with Fin tech trading system and Auto trader I have to warn you that I have received alarming news from some of my readers and subscribers who allegedly have made heavy losses after funding their accounts with Fin Tech app. To eliminate further doubts, I have taken a through review and investigation of Fin Tech App and what I found should make you stay away from this money stealing system

On visiting the official webpage of Fin tech, I could instantly tell through their overworked presentation and website that the whole production has an evil intent of stealing from unsuspecting day traders and investors

Before I reveal the glaring untruths, lies, fake promises and incentives offered by this lethal app, I have to inform you that there is a legit company by the name Fin tech that has nothing to do with binary trading and have no connection to this money stealing scheme. This company actually deals with IT Solutions tailored to Small and Medium enterprises

Although not flamboyant and boastful like many scams out there, the blatant lies by the alleged owner,a Mr. Daniels, that you can make at least $14k  weekly doing nothing guaranteed is a sure red flag that confirms that Mr. Daniels is after your money after all. This is easy to say but Daniels, doesn’t offer any proof or verifiable results or care to show us how this system is able to generate such impressive results in such a short period of time

The claims that his software has a win ratio closer to 100 % is another red flag  that cannot just be ignored. We all know well, that even with the most sophisticated binary trading software, you cannot achieve such impressive ratios because of market fluctuations and unpredictability.

Now let’s have a look at Mr. Daniels and his Fin tech company. Although this guy claims to have created this software 18 months ago and that he has been very successful as a result of using his software, there is no one knows about him in the trading industry and even as a search on the internet does not give us any info on his contacts leave alone his LinkedIn, Twitter or Facebook profiles. Likewise his company contrary to what he says does not exist not before January this year when his domain for fin tech app was registered. In simple terms, there is no evidence that Fintech limited exists anywhere except in the mind of the alleged owner Mr. Daniels 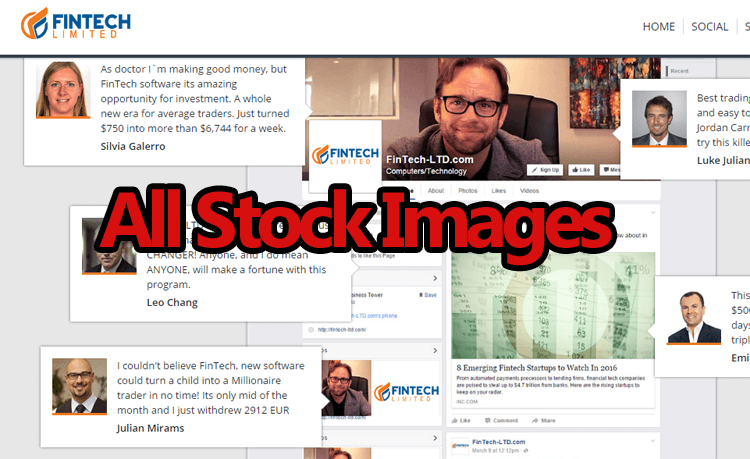 Several pictures in social testimonial section of their web site claim to display real; people who have earned serious money with the help of this system but after checking them out I found most of them were stolen from the internet, meaning none of those people are genuine traders .This pathetic scam has even gone further and done what no other scam has ever done; stealing the image of a UK member of parliament. Ouch!! .If you look at Fintech testimonials, you will see a picture of a certain lady by the name of Jennifer Sovilino who claims to make at least $2k daily with the help of Fin tech..The truth is this image belongs to the honorable member of the UK parliament by the name Kate Green. Below also find the picture of Oldmansteve who sells his kidney at Fiverr.com for a round of cheap rum.

You should be aware by now that coinage of nonexistent firms is a common method of deception employed by fraudsters to trick unsuspecting customers. I have to conclude that Daniel Roberts is an imposter, a charlatan and a paid actor hired to represent harmful software like Fintech scam. The whole Fintech trader presentation and production is full of fake profiles & identities, stolen Fintech testimonials, misleading claims and incentives, and  a nonexistent company. What a low for a guy who claims to have achieved a lot in the IT world! For all intents I warn you not to invest even a bob with Fin tech app and auto trader

There are alot of scams out there but I have found a few systems which I have personally tried and tested. Check them out here