Ladies and gentlemen a new scam app is making rounds on the internet. Hexa Trader App. Be warned. The scammers have a single aim of stealing your hard-earned money. As your informers we strongly advice you to take precautions and tread carefully on the internet, otherwise you will lose a lot money. The app has so much in store for you, this must be too good to be real. Is it really true that one could make such money in a single day? Continue reading our detailed review to get the whole story concerning the scam.

The rogue Professor claiming to be an alumni of MIT has so much to give away. He goes on and shows you the results from his binary option robot. He promises that you will get the following results by signing in as a member. However real or convincing he may sound don’t dare invest with his application. It is all a lie.

Rupert having been a computer science student at a prestigious University in the US says that his robot is so actual and uses the most sophisticated technology. He goes on and says that it is automatic therefore you don’t even have to raise a finger to operate the robot. It will work for you while you are busy doing other things. This is not true, no bot can work on its own and deliver the crazy results the alleged CEO is saying.

You will be making a total of $1,644 each day. So says the Professor. Thanks to the sophisticated algorithm of his application. You don’t have to worry about making anything less than the amount he has said. No bot can make such an amount in a single day. Don’t trust this guy.He continues and adds that the system has an accuracy of 94.7%. He is simply trying to say that no matter how poor you are at binary trading option you are always guaranteed to make profits for the robot has the highest accuracy there is in the bot market. This can’t be true in any way. It is a machine there can never have such efficiency.

Who is CEO Professor Rupert Connor? 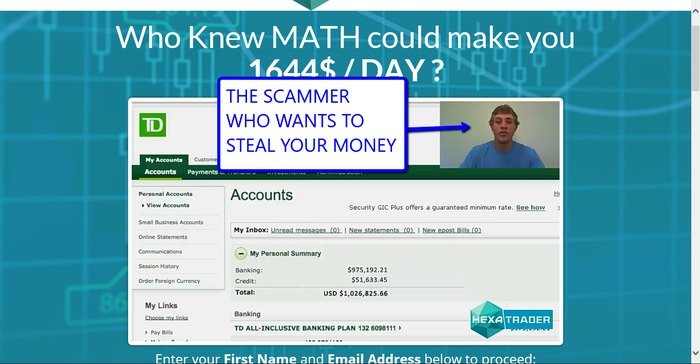 The alleged CEO claims that he was a student at MIT College and studied computer Science. To be frank he doesn’t deserve the title Professor. He is an impostor hiding behind the title. He is only trying to make himself seem learned and credible. Don’t be fooled.

Our detailed research also showed that he is not in the database of MIT. Checking on the social media he is nowhere to be seen. Genuine CEOs are on the social media trying to sell their brand, but why is Connor not there? Simply because he is a scammer and doesn’t want to be traced.

Is Hexa Trader App a Scam?

Yes it is. A scam that is barely two days old. And below are the reasons to discredit it as a genuine bot. it was made to steal from innocent traders.

The alleged CEO proudly claims that the company started in 2013. Well, using the famous online domain name checker who.is we discovered that the name was registered last month. The CEO claiming that the company has been a success since 2013 is a big fat lie. He also adds that he has numerous satisfied customers. This can’t be true since the company which is not even genuine is barely as old as he claims.

It is not possible a company to have a CEO that doesn’t have any contact. He is not on the social media neither has he given a number that we can reach him through. This is a clear indication that he is a ghost CEO, claims to be but he is not. Do you want to invest in a company with a fake CEO? Of course not. 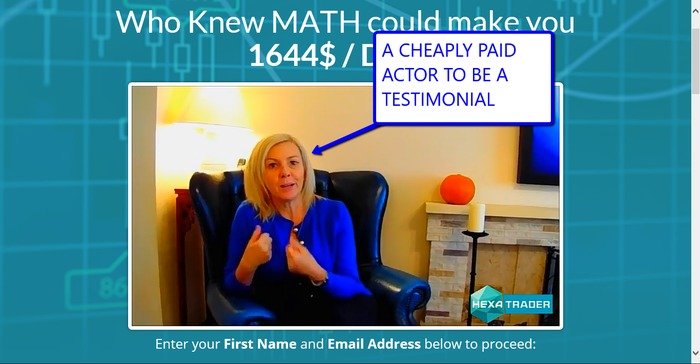 From the video presentation we come across testimonials. Do you think they are genuine? No, not at all. They are cheap actors hired from Fiver.com. They endorse the scam application for they do have a share on the money the scammers want to extort from you, though very little they still want it and have to lie to get it. Don’t believe a single word from these hired testimonials. 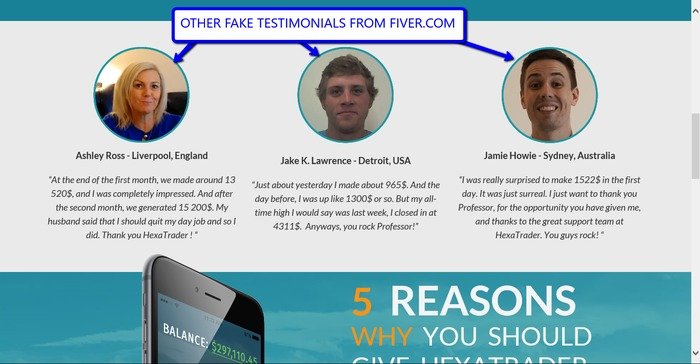 From our well researched review, it is clear that all the positive things said on the video presentation are nothing but lies. All the results said by the rogue CEO are one big one just to lure you to register with them and within the blink of an eye all your money is gone. Stay away from these thieves and be safe.

Verdict: Hexa Trader App is a scam and must not be trusted