Today I give you an unbiased review of The Hoffman Stein’s Capital Nexus App by Dr. Henderson. I have to say after listening to Mr. Hoffman Stein  lousy presentation, I found nothing but a web of lies, deceptions wrapped in misleading statements, facts and claims with a clear intention of tricking new investors and day traders in to depositing money with his system.

Proof that Hoffman Stein’s Capital Nexus App is a Scam

The first part of the presentation doesn’t offer much details regarding how this system works and the theory and fundamental algorithm that has helped build it. The guy only mentions that this system only generates 100% winning trades always. I have to say I have witnessed many scams that promise such winning rates but I cannot help but say that Hoffman Stein Capital trading is another scam

The guarantee of $125,000 weekly is false. You are all too aware that in the binary trading marketplace, no one, I repeat no can guarantee anything since trading is influenced by many variables beyond the control of anyone. This is nothing but a fairly tale figure intended to make you salivate at the prospects of making fortunes out of thin air. Besides I found the constant pop up that never seems to disappear as another pressure tactic meant to force you into signing up without a second thought.

Unfortunately his company Hoffman Stein Capital does not exist anywhere and there`s no evidence that could justify its existence and reliability. Furthermore I couldn’t find even an iota of information associated with them online and to be honest, I have no doubt that this is one of the misleading information that I have encountered in the presentation. The truth is Hoffman Stein Capital is a bogus company that is not registered or licensed anywhere.

It’s not shocking that this fake company is accompanied by a bogus CEO, Antony Henderson who is nothing but a stock image. Hoffman`s claims that he is the most hated figure in Wall Street is untrue considering he does not exist. Not only is he not hated but no one on Wall Street knows anything about him. The truth is he is a hired voice actor whose job is just to do the presentation. Even the team (Ann Chong and Allen Kuhn) he has assembled to develop his dummy system are not real. My investigation was not able to unearth any information regarding them. For all I care these people were just made to up with a sole of purpose of tricking you to sign up or deposit money with the Nexus App software

Claims that his secret method has been covered in three major dailies such as LA Times, Bloomberg and Wall Street Journal is bullshit. A quick search on Google does not show their coverage anywhere. Besides claims that Hoffman Stein’s Capital Nexus App is the same software by Wall Street traders is yet another big fat lie.

If this has not yet convinced you that Hoffman Stein’s Capital Nexus App is one dangerous scam then you need to checkout their fake testimonials from cheaply paid Fiverr testimonial providers. For example one of the guy giving the testimonial is a known Fiverr actor who offers testimonial services for a measly $5. I think it’s really sad to see people lying with a straight face in exchange for $5.. 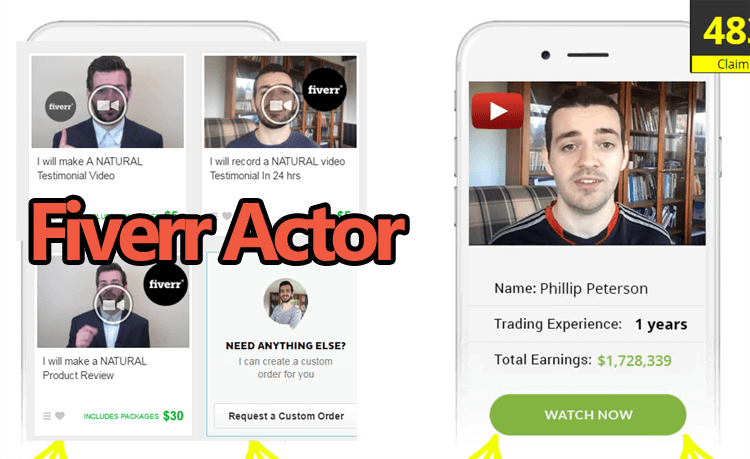 Lastly be warned that Hoffman Stein’s Capital Nexus App requires a download and therefore poses a great danger for your phone. Such apps are known to be full of malware and might steal sensitive information from your phone.

Conclusion From My Hoffman Stein Review

The whole presentation and website smells of a scam. From fabricated trading sessions, invented personalities, false credentials, misleading information and unrealistic all point to a deadly scam. I have a strong feeling that Nexus App will cost you agony and untold losses. There is not a single piece of evidence to suggest that Antony Henderson and Hoffman Stein Capital Nexus App will help you trade or make money. Although the subscription is taunted as free, once you register the system will prompt you to link your credit card and bank details to your account further confirming that we are dealing with a very shady operation. If you don’t want to suffer heavy financial losses I advise you to refrain from registering or depositing any money with this service.

Also don’t forget to check out my full scam list here and also my trusted signal services. If you are new to binary options I also recommend that you get a free demo account here to get used to how binary options work.