Insured Trading App is a scam trading software and can be automatic or manual. It is for free but for a limited time. From the video the owner says that the Insured Trading App System a lifetime guarantee. It only makes profits at zero risks. Traders be warned about this application for it is just a replica of a previous version they had Insured Outcome Software. Don’t deposit your money with them for all that has been said in the video is a scam and will disappear with your money.

Oliver Breitner the actor in the video is claiming that the application can make for you a total of $750 per hour and $18000 in a day without worrying of losing for the application is efficient and superbly coded to cancel out any risks of losing thus profits from the moment you deposit with them for the rest of your life. The actor is unreasonable and unrealistic for it is totally impossible to make such an amount in an hour or in a day. Experts in the trading industry don’t make such enormous amounts within that time span how comes an amateur with no experience in trading make such money. Be warned for as soon as you deposit with the application your money will never be seen nor make the profits promised in the scam video. 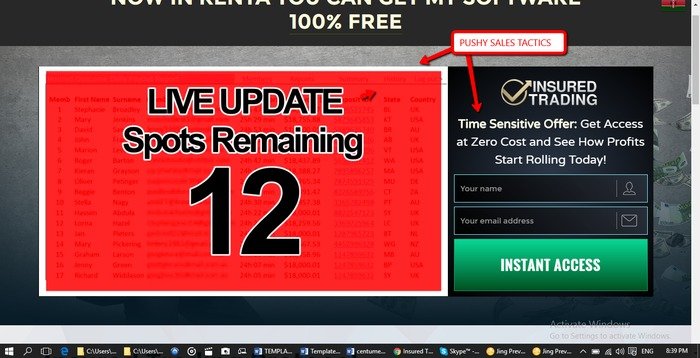 Oliver Breitner Insured Trading App system is so highly talked about in the video. Its sophisticated algorithm and coding which makes it the best in the market and gives positive results all the time. He is persuading newbie traders to invest with them for a risk free financial freedom at the moment and the days to come. Insured Trading App system is a manmade programme and is vulnerable to risks of hacking. The alleged owner is talking of impossibilities. Your money is at risk if invested with them and you should not be convinced that all is well with your money.

Oliver Breitner in his video says that the application is capable of working in two modes, manual and automatic. He advises you to just invest your money and take charge of the profits accrued from the magic that the application is going to do. Frankly, to benefit as much as you want you must be there to overlook how things are happening. This is opposite of what the alleged C.E.O is saying, just set the application and all will fall into place. Do not waste even a second to invest here for it is losing hard earned money. 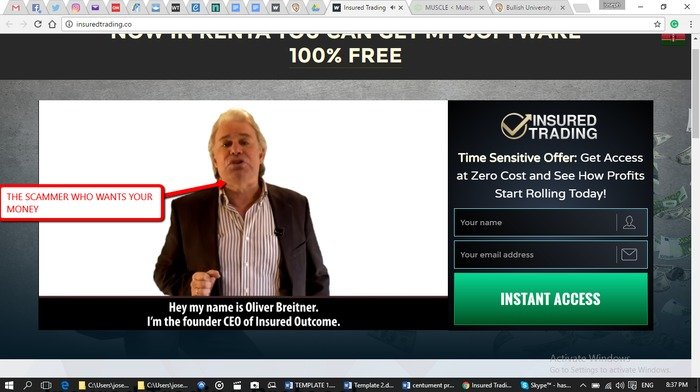 Oliver Breitner promises to give $1000 of insured trading bonus to anyone who reads the scam video on his website. Who gives such a sum of bonus to just any reader? This is a trap do not dare to even open the link sent via email. It contains his many words of what the application will do for your little money. This is a scam and should not be attempted, whatsoever is said by the actor who probably never invested the $50 million.

Proof that Insured Trading App is a scam

In the video Oliver Breitner claims that he has been on national news because of making others quick millionaires. He got noticed by Wallstreet brokers. These are bare lies, no news agency is related to him for this will be discrediting the news agency, and none wants to be associated with a liar.

The links related with the website are not clickable. This is enough proof that Insured Trading is nothing more than a scam. The links should be able to open the official sites of the mentioned companies.

No contact information given in the site. The owner doesn’t want to be traced or communicated to. This is enough reason that the company is a scam and a hub for cyber-criminal activities.

Just like recent reviews on Bitcoin Money Machine and Prizm Tech this is just another scam autotrader to avoid. Insured Trading App is a cheap scam trying to exploit you in a very scandalous way. Be warned and stay away from it unless you have money to throw away. The company is illegitimate and not worthy of your time.

Verdict: Insured Trading App is just another scam that you need to avoid

This trading app is getting adding to my ever growing list of scams.