This scandalous system targets newbies. It wants to extort their hard earned money in the name of making them millionaires. Don’t fall for this pathetic scam. It will only steal from you never to recover your stolen money. Therefore we urge you to stay away from it and read our well researched review to get more insight and reasons to back off and be safe.

Jane Marshal’s Wealth System is a new binary option trading tool with major proposals. She has so much in store for you. Be warned she is just like any other scammer. Using enormous words and very big promises to lure you to register with the system. Don’t be convinced for the promises are scrupulous, dirty and unrealistic. 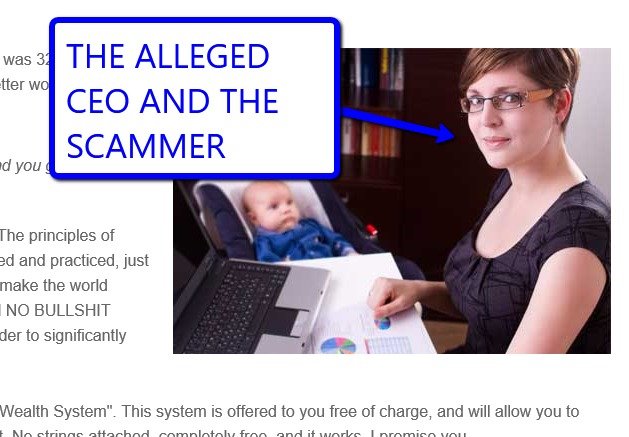 She starts by saying that she has a heart of a kind human. She wanted to play a major role in the society and make a difference among those who had financial constraints. She started the Jane Marshal’s Wealth System with this sole intention, to give back to the society. Don’t believe a single word from Jane, she is so inhuman, stealing in the name of giving back to the society. Avoid this thief and run as far as you can.

Jane Marshal, the alleged CEO claims to be a Wall Street broker. She goes on and claims that she developed the software. It is so obvious that she has no knowledge in developing binary option trading tools as we will see later in the review. She lied about being the developer, what makes you think that she will not be lying when it comes to making you an independent trader? Think twice.

You are promised financial education. This is a cheap marketing trick. To tell you the truth it is their lame way to get you to register and do away with your cash. Once you register you will never get the lessons.

We want you to know the truth about this alleged CEO and her unrealistic promises. We want you to be financially independent by not depending on promises that will lead to lose of your hard earned money.

Proof that Jane Marshal’s Wealth System is a Scam

To start with, Jane the alleged CEO is a total scammer. All the credentials she highly speaks of about herself are a big fat lie. She is none of them. She is not a system developer. Neither is she a Wall Street broker. Just a desperate thief ready to do as many dirty tricks as she can imagine to get hold of your genuinely earned money. She wants to make herself rich by tricking you that you will be rich. Back off. Don’t believe a single word from her.

The cheap video is a living proof. It is covered by a voice over narrator. Who has probably been hired from Fiver.com. The video is a complete joke, a cartoon? Yet she makes millions. Makes no sense at all. If she is a genuine giver to the society and broker why then not show her face in the video? This tells us that she is unreliable because she doesn’t exist. Only wants money that she never worked for.

The image the CEO is using as her own is a stolen image from the internet. How unethical of her. She is impersonating other people. As a matter of fact she has committed many offences enough to put her behind bars for a very long time. We are sure you don’t want to associate nor invest with such a person. 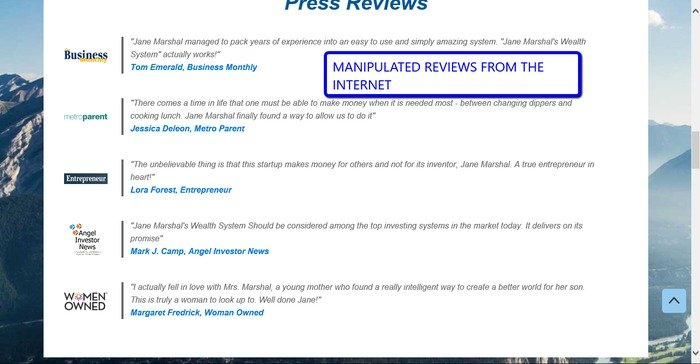 Opening the website you see so many budges from reputable companies. She is trying to convince you that she is legitimate. We tell you she is not. They are just images of these legit companies stolen from the internet as it is her norm. If the companies had really partnered with her the budgets would link to the official sites of the companies. But this is not the case. 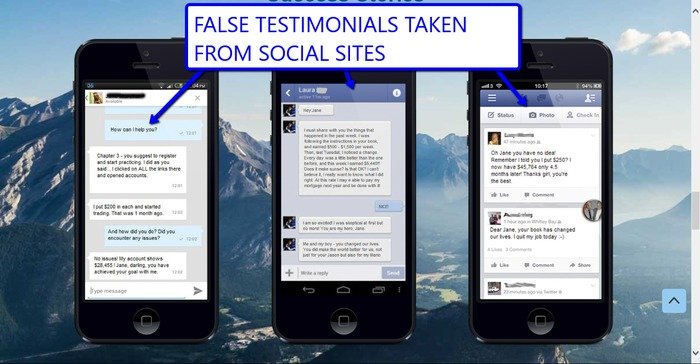 From our conclusive review you have enough reasons not to venture into this unrealistic, scandalous binary trading system. From the false promises to the non-existing CEO. Staying away from it would save a great deal of your hard earned money and save you severe headache. Stay away from Jane, Nasdaq Inside Trader and The Tesler App and be safe.

Verdict: Jane Marshal’s Wealth System is a Scam, stay away and be safe