I’m going to start this review by warning you to stay away from the Nesdek trading app presented by a fishy looking guy named Mike McDonald, otherwise you will surely lose money. During my scrutiny and review I have encountered several misleading claims and facts by Mike that confirm we are a dealing a with a high tech and sophisticated scam here. For all purposes and intents, don’t invest your money with this app before you read my honest Nesdek App Review.

On visiting the official website of Nesdek Scam I was met with an old guy who says he is the Nesdek Inc CFO (Chief Finance Officer) and claims that his company has made people hundreds of millions through their patent pending Nesdek trading app for several years. I have also seen this scam been referered to as the Nesdek Corp but they are all just the same fraud. Let me blatantly say it out straight that Mike is peddling nothing but lies. There is no such company on the internet or anywhere, if there was it would be very easy to get their registration and licensing details from the Securities and Exchange Commissions, the agency responsible for registration and regulation of financial and investment firms and brokers in the US. In case you are not yet convinced that Nesdek is nonexistent then let me unleash a piece of proof to put this to rest. According to Who.is, the domain for Nesdek trading app was only registered in April, 23rd, 2016 confirming that his company could not have existed beyond this date 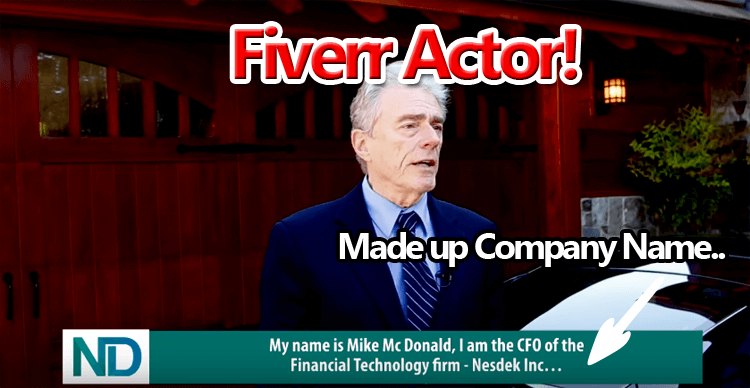 Mike in his usual boastful element tell us that he is a veteran Wall Street broker with an 8 figure bank account and that last year alone he has generated over $1m with this tailor’s dummy software. On the same vein, he claims that today only he is giving you and me a cost free access to this app, an opportunity of a lifetime to make us millionaires and for that reason you need to hurry since there is only one spot left…yea right!!!.Unfortunately this loser who still thinks we will get the silver medal is nothing but a hired mercenary whose job is to execute this evil scheme.My search on the internet did not reveal his connections on Wall Street let alone any details about him on the internet.

Now lets talk about the Nesdek App Testimonials which are 100% fake and fabricated. Take a look at Michael Kaiser below or should I say the made up testimonial with a shutterstock image. If your not familiar with shutterstock then its a site where you can buy images to use on your site. This is proof that Michael Kaiser is a made up person

Now lets take a look at Lisa Powers who even give a video testimonial for the Nesdek software. In reality she is a cheap fiverr.com actor and the scammers that built this system paid her $5 to say how great the system is. Fiverr is a very popular site for all these Binary Options scams as they can get very cheap testimonials from these actors that look genuine.

Going through the entire presentation almost made me vomit considering the whole crap presentation was full of froth and stale testimonials. Take for example the testimonial by Sarah. I couldn’t stomach her claims, even for a minute that she was able to make that amount of money in just a few minutes they strolled with her handler, Mr. Mike. Although she claims that she is logging into to her trading there is nowhere in the entire walkabout she does so. All that she does is show us a screenshot with fake results that you can easily get from the internet. In addition the screenshot shown by Steve, the genius behind Nesdek App is counterfeit. Earlier I had informed  you that the domain for this Nesdek trading was registered on 23th April,2016 but on a closer look Steve`s screenshot indicates it was taken on 18th April,2016. Question is how did he make this sort of money even before the software was born????

Conclusion From my Nesdek App Review

In my review I have supplied concrete and unwavering proof exposing the Nesdek App Scam which is fronted by Mike McDonald. It really is a total joke which will drain your pockets very fast. The only thing I can give credit for is coming up with an impressive website which is a bit different that the usual scam which unfortunately is convincing far too man people that this is a reliable and trustworthy service.

Verdict: Nesdek App Software by Mike McDonald is a loser scam you need to avoid

Other viral scams to avoid – Disrupt Trading & The Alderley Code

Don’t forget to check out my tried and tested list of signal services here if you are looking for something that has really worked for me. Looking for a broker then also check out my list of trusted Binary Options Brokers