Let me start by saying that Lex Simmons Jr. the alleged mastermind behind the opus formula trading software is not the real owner of this system but a cheaply paid actor employed to lie in front of a camera by a crew of evil scammers whose aim is to steal from you. Sadly this shady auto trader is already going viral and I have even received reports of people being scammed of their hard earned money. In my opus formula review I will be exposing all the lies, misleading statements and claims and other loads of scam features employed in the dubious aim of creating fake millionaires. So before you sign  or invest any money with this service, please take your time to read my honest review and see why you should run scared of this dangerous system

The main scumbag in this opus formula scam is a guy called Lex Simmons,a loser multi millionaire who claim fuels the fire by claiming that he is out to change your life for the better by first exposing other guru`s system which were programmed to lose your money in no time. The solution to this which he is giving out for free is awkwardly named Opus Formula which has allegedly made him a lot of millions 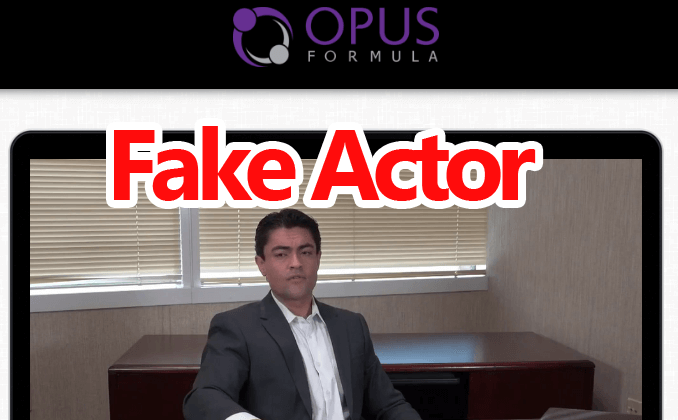 Without wasting time I want you to check the image of  Lex Simmons the owner and found of Opus Formula who claims in the video that he made almost $30 millions in just one year alone. This bold claim  is the first red flag I have an issue with considering that this is such an impressive return on investment for someone his age. If you look at an article published by a Forbes writer date mar,13th,2013 titled “how much do wall streeters really, earn” he pointed out that the ceo of JP Morgan was the highest earner but going by what Lex Simmons opines, his claims are just BS. If you are not yet convinced that we are dealing with a lousy scam, below is another picture of a bearded guy who gives a testimonial on opus formula video. The guy claims that he is a south African businessman but the reality is that this guy  sells cheap gigs at an online  marketplace called  Fiverr. You can find this guy here.

As I had mentioned earlier, Lex Simmons is not the owner of Opus Formula and there is no information anywhere to indicate otherwise .He is just a hired up character whose brief was to lie on camera on how rich one can be if you sign up with this bogus service. Any attempt to find him on Google will not reveal anything; no Facebook, no LinkedIn or twitter profile-a sure proof that this guy does not exist anywhere except on fiverr where he is trying to make ends meet by selling cheap $5 gigs.Next I have to say the video is full of misleading facts, and false claims and this fake guy is trying very hard to to persuade you that he is actually doing you a favor and that you`re one of only twenty people who got his “special invitation” but the truth of the matter is that they spammed millions of emails.So don’t be fooled that you are the only one who  has his invitation and there is no system in place to make you $1,762 daily  from a measly $250 deposit with an unregulated broker

Conclusion From My Opus Formula Review

In the whole video presentation and production, Simmons and his partners are offering nothing. We have all have heard the same old song of easy money and goodlife on the fast lane. Luxury cares,fancy restaurants and employment of inflated bank accounts and fake testimonials bought from Fiverr marketplace are all redflags of these scammers attempt to cloud your decision making and dupe you into signing up and funding your account with this shady service. Opus is a sure ticket to hell and financial nightmare that you will want to stay away from like right now!!!

Verdict: Opus formula trading software is a creepy scam you need to avoid