Pay My Vacation Software System is a cheap “ass” scam application that has just been launched. It is a binary option trading application as claimed by the alleged owner of the software. It is just like any other obvious scam with nothing but a voice-over actor. Created to steal money from newbies in the binary option trading method. The so called auto trading system is nothing more than a scheme meant to siphon your hard earned money. In our detailed review we are going to expose all his lies one after the other. Stay with us and learn to flee from this scam.

Results from Pay My Vacation Review

Jack James highly talks of the system and how it can easily make you a millionaire in weeks. He continues by feeding us with his obvious lies that the application is automated and will handle the trading for you as you have a good time. Don’t give in to any of these. They will deplete your savings and leave you a poor person while he and the other cyber criminals are enjoying the money they stole from you. Stay away and be safe.

The voice narrator who claims to be the CEO of Pay My Vacation System is feeding you with empty words. He is saying that the software is automatic. This way the program will be making thousands of dollars for you while you are having a good time enjoying your holiday. He adds that the application only executes winning trades and nothing less. This is just impractical, experts who have been in the binary industry for long won’t agree, at least there has to be some supervision to make sure that all is going well. 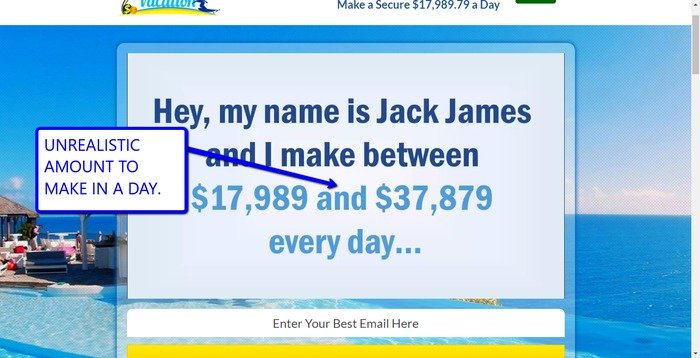 Jack James yet gives another lie by saying that the app can generate at least $17,000 in day to each of their members. With today’s world quick access of information, he and his team would have been in the business news of renowned media houses like BBC and CNN. But where is he? This is a clear indication that he cooked up the figures to impress you. Don’t be fooled by cooked profits that he can never achieve.

The alleged CEO and owner of the system is pressuring people to sign up with the program and start earning between $17,000 and $37,000 in a day. Why is he pressuring others to sign up if he has enough money to last him 10 lifetimes? This shows us that he is a desperate guy who is also under pressure from his bosses. He is saying that there are only 27 spots left and as soon as they are filled up the site will be closed down. He is trying to run away for he knows he is not legitimate and won’t last long before he is exposed.

Jack James insists that to benefit from the efficiency of the automatic application the only thing you need to do is register and make an initial deposit which he doesn’t specify. This makes him fishy and dubious. No specific amount of deposit? This doesn’t add up at all. He wants to reap both big and small, adding up the total would give him a lot of cash in the end. Don’t be fooled by this scammer who is greedy and won’t even spare a cent for you.

In the website there are images of people who are termed as testimonials. Don’t be fooled. These are images downloaded from the internet and fixed with endorsement statements. 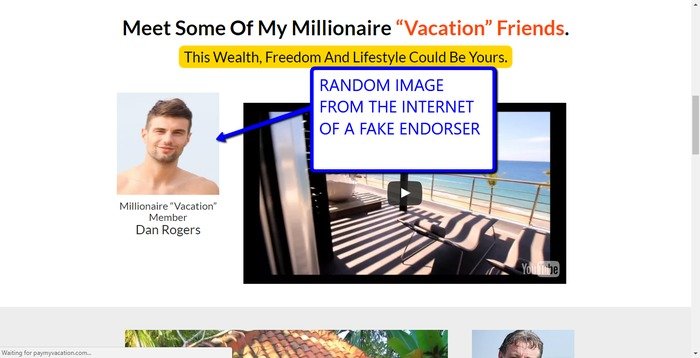 In the other videos at the bottom of the site, we note that they are more of the same to the main video, showing luxurious places with voice overs doing the explanation on how the person narrating was able to own such a house and advises you to practice what they are practicing and you will reap big, just like them. Don’t listen to any of their words. The videos are just downloads from the internet, while the narrators are just paid actors to lie about the video. Stay away and be safe. 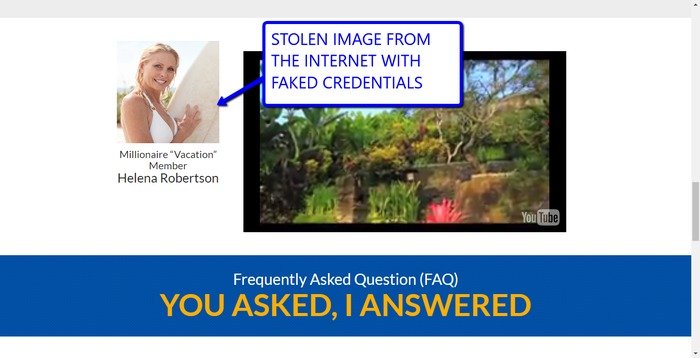 Who is CEO Jack James??

Jack James the alleged owner and CEO is just an actor paid to endorse the application. He is a fake identity with fishy details on how to be a millionaire in a matter of weeks. He should not be trusted for he talks of impossibilities and unrealistic things. He calls himself a CEO, right? But where is he on the social media. We checked on all the social sites for nothing, he isn’t there. This is enough to term him a fake identity.

Is Pay Mc Vaction a Scam?

From my review and reserach I’m conclusing that just like Gemini 2 and Centument Project this is nothing more than a scam production out to steal your money.

Conclusion from Pay My Vacation Review

Pay My Vacation System is a scam. There is no such name in the binary industry option and where the name surfaces it has the reputation of a scam. There is use of fake identities, fake testimonials and stolen images from the internet. Would you invest your money with an application with such reputation? Of course not. Stay away from this fraudulent scheme only made to steal from you.

Verdict: Pay My Vacation is a scam that you need to avoid

Please consider SHARING this post to save others becoming the next victims of these scammers. If you are looking for a genuine system then check out my Tried and Tested Trusted System List.