Prizm Tech system is an auto trading software that has just landed in the market. Actually it is just one month old since it was launched in August 10th 2016 by the one guy who goes by the name Richard Squire. The software has been made especially for people who have lost thousands of dollars via scams. Thing is you will only get to lose even more money with this software too.

Richard Squire, the actor in the video tells us that he is so happy to share his secret to making more money and he will do this free of charge. All that we need to do is pay a fee of $250 as a deposit. Notice how $250 is the in thing in the scam industry? After that you will be given an API key, this is to fool you. Now when the guys on the other side receive your funds, be assured that you have earned someone tax free money because there is no assurance that you will see your money or the winnings. They tell you to sit back and relax because you will even be making money while you sleep but that is not going to happen. Binary option experts advice that users be monitoring a software’s actions so which is this software that works like a magic wand? Another lie from Nathan is that even users with zero experience can join the band wagon, but be careful, ignorance is no excuse. Going into trading without any experience is not only irresponsible but you are setting yourself up for failure.

The guy playing the role of Richard Squire says that this is the go to software for ordinary folks. This is not the kind of software that makes you an instant millionaire and it will take you weeks, months or years. So he is simply saying if you do not see any money in your account, just take it easy. They promise you an average income of $8k per month and the best thing according to these guys is that you get the lucky opportunity of owning a piece of this software. 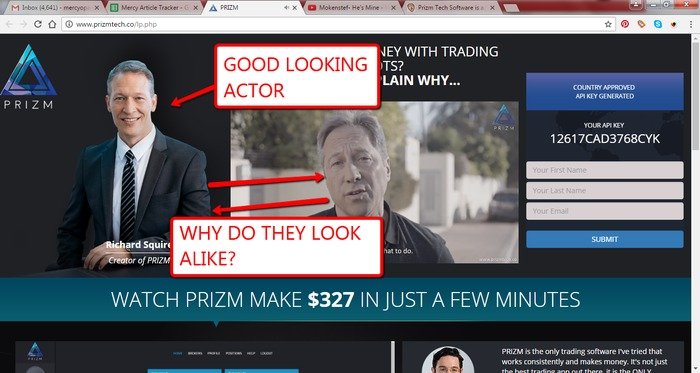 Proof that Prizm Tech is a Scam

There are several reasons as to why we label Prizm Tech a scam. First and foremost, the CEO of the whole thing, does not exist.

Secondly this Richard Squire guy says that he has been in the business of massive wealth creation since 2007. Well a simple and easy check using the leading online domain checker, Who.is reveals the opposite. It shows the site was registered in 2015 and but that was it then in the summer of 2016, it bounced back to life. So why would Squire and his team lie about their experience? You guessed it, lies. This sort of information is added so that the site appears more professional and legitimate. So Squire wants you to think that he is a guru and maybe he is one only that it is in the field of scamming.

There is no information concerning contact or location that is shared in the Prizm Tech website. Cyber criminals hide behind the web and the first rule of their trade is to leave no traces. The site only asks for your details but there is nothing on the part of the seller. Something is definitely fishy in such a kind of transaction. 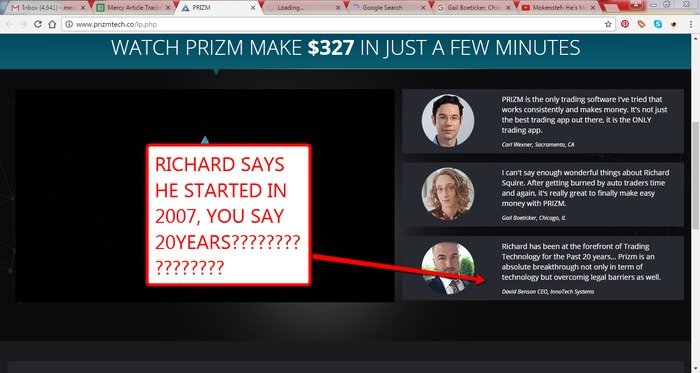 Just like the recent reviews on Lucrosa and Bitcoin Money Machine this is just another scam. Would you give your money to someone who does not exist? Would you flush your money down the toilet? Well giving your money to Prizm Tech is the same as throwing your money away. Now how many hours did you work to get paid? So what makes you think that just by magic, money multiplies itself and doubles? Trading involves work and whoever tells you that you can be rich while sleeping is an insult to hard work. You work hard to earn, keep your money safe because as far as we are concerned, the Prizm Tech system is scam.

Verdict: PRIZM tech is just another nasty scam out to steal your hard earned money

We hope that this review has given you insight on the signs to look out for. Do not become a victim of a scam. This review has been written to keep you safe. Do not fall for the flashy cars and yachts or hired homes shown in the video. They are just a mirage to fool you into giving away your money. Prizm Tech is well laid out scam attack, read this review and stay safe.

I know it can be disheartening when you thought you were on to a winner but any time I find something that has made me real money I always post my review and proof of earnings on my Trusted System List.