Profits 4 Patriots (P4P) auto trading binary option application launched recently but before you even consider checking it out, if you haven’t received their mail already, beware that it is just a scam. The app promises you everything you dream of and just what you would like to hear today, the secret to financial freedom. The alleged developer uses emotions to push you into downloading the application and investing whatever you have on with the anticipation of a brighter future ahead.

You should always be a little skeptic when you come across such persons or platforms. Conduct a background check on the platform, developer and the viability of the promise; and this review does it for you. It seeks to explore the site a promise at a time and reveals why you shouldn’t trust it or its developer with even a dime.

Out of the blues comes life-changing software that promises to turn your life around and take your life on a magical ride with $1,500 earnings every 15 minutes. To top it all, it promises to earn all that from a small initial investment of $250.
The “owner” also promises to place you on a path to the coveted millionaire status within a few months with guaranteed $100,000 monthly earnings. On auto-trader, the alleged developer promises sure wins and negligent misses with just an average success rate of 76% plus a profitability margin of 350%. The “owner” also claims to have a deep binary option knowledge obtained throughout his eight years of trading experience.

Additionally, he claims to have access to confidential and market-influencing information that he so generously wishes to share with his “patriots” free of charge. He also promises to teach you the basics of trading and grant you access to top-class binary trading resources.

You might not have the slightest knowledge of how Binary options operate, but if you have a clue in numbers, you will know that the alleged profitability figures don’t add up. For instance, the 76% win rate is as good as winning three of every four trades. Couple this up with human actions and you might be losing more. This means that at the very least, you will operate at break even. How then does this make you $100,000 in a month with just $250? Your guess is as good as everyone else’s.. it won’t. 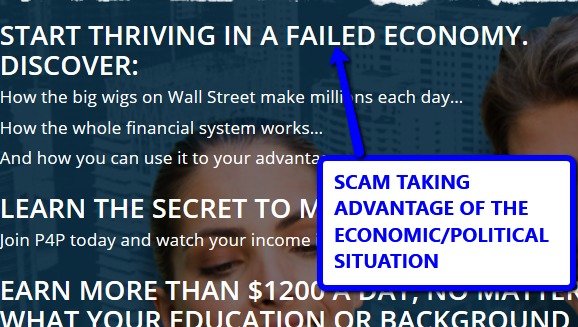 The promise of $1,500 in just 15 minutes after joining is a total fallacy. Even the most experienced binary options trader will inform you that such an assertion is impractical unless the “Patriot” will be rewarding you from his own pockets. There is a reason he hasn’t explained how he will achieve this; primarily because it is just meant to draw you into the platform. Yes he has his own hired guys.

You also understand that any level of insider trading is unethical and criminally prosecutable. This means that if the Profit 4 Patriot developer’s do possess such information, which is highly unlikely, joining them will be tying yourself as an accomplice to the crime. The only other scenario, in this case, is that the alleged developer is just bluffing.

Douglas Ward fronts himself as the coder of the Profit 4 Patriots binary trading tool and its company CEO. He claims to be thoroughly experienced in the Wall Street trade; despite the fact that no credible site validates his claims safe for his Profits 4 Patriots website. The fact that he can’t distinguish the year the binary options were developed from the one they were availed to the general public further unmasks his shady character. This reviews assumption is that he is just an actor. He also is trying to make use of the current political climate in the United States, don’t dare go for a pity party or else you will be parting with your money.

Is Profit 4 Patriots a Scam?

Yes, profits 4 Patriots together with its alleged developers are a scam; a bold claim proven by all the facts presented above. Just like the other nasty scams Polygraph Millionaire and Shepard SDP I reviewed lately Profits4Patriots is another one you need to avoid.

Douglas Ward and his shady software are just after your hard earned cash. Even though he may be saying all the right things, just what you would like to hear, there is no ounce of truth in whole scheme and properly orchestrated act. There is no way he will get you $100,000 a month from a $250 deposit with a 76% win rate and neither does the platform offer $1,500 in 15 minutes unless it is an unrealistic sign-up bonus. Joining this little scam can only get you to two places; you will either end up on the rough edge of a personal financial crisis earn yourself a prison term with the possibility of asset repossession for illegal insider trading.

Verdict: Profit 4 Patriots is a scam, avoid it like a plague and save your hard earned money.

If you are looking for something to make you some money then check out my Trusted System List which also contains my documented results.

Please also consider SHARING this post to help others avoid getting caught by the scammers behind the Profits 4 Patriots Scam.