Quantum code review: Michael Crawford is selling you a big scam and they have already scammed 1000’s of people

Before you even open up that email or visit the official webpage of Quantum Code I have to warn you that some of our subscribers and readers have already reported massive financial losses and untold agony after using this trading app. In order find the truth about Quantum Code, I have taken my time and investigated this trading app and discovered irrefutable proof that quantum code is an evil scam hell-bent on stealing money from unsuspecting members of the public. In my Quantum Code review I wish to caution you not to place any hope in it but what I have is to highlight and point out glowing inconsistencies about what it promises, outright lies and other scam characteristics all fused together in order to execute this scam job.

Indeed the presentation by the founder a Mr. Michael Crawford is littered with untruths, bogus claims and blustery rhetoric and hype as you will see in this review

On visiting the official webpage of Quantum Code, I was met by an overworked video presentation where the quantum code owner ,Michael Crawford , standing in front of what looks like a rental jet claims that he is the nicest rich multimillionaire who is about to change your lifestyle for good. He aims to achieve this by giving his quantum code scam software to only lucky 20 people. Before we dig deeper, Michael has the guts to inform us that he is an authority figure who is reputed in financial magazines such Forbes 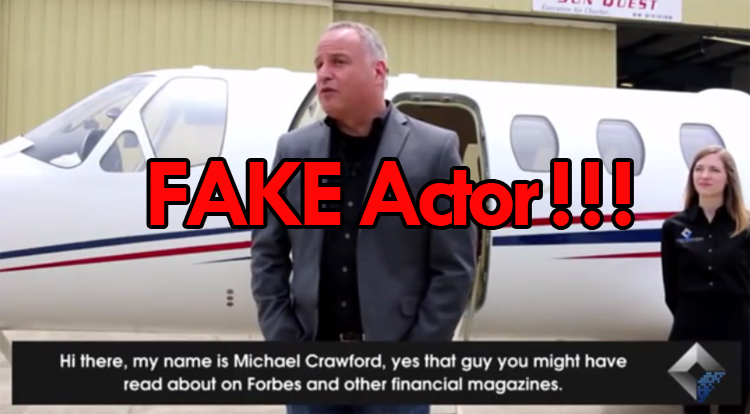 According to the owner, the quantum code app and auto trader functions by analyzing financial markets and then scraping other traders` trades thereby leveraging the benefit of determining the needed calculations quicker than them. In short his system is copying other systems` prediction which is outright unfeasible. Otherwise how sure is he that his system only copies the right trades and not the losing ones? Secondly whose systems will it be scraping? Thirdly is Michael not the same presenter who was promoting another scam software called Terrans Capital recently? That Terrans scam app was responsible for untold agony and financial loses and was immediately reviewed and dusted to the dustbins of hell. To save you the trouble of listening to all this garbage Its clear that the owner is selling new investors s and day traders an extremely simplistic, anachronistic tale and hype with the hope that they will earn money with his quantum code app.

Crazy claims which are completely impossible

Let’s proceed with our review of quantum code scam. In the presentation Michael claims that he is a well-known figure who has been featured on Forbes but my quick search on Google and Forbes revealed nothing about this further putting his reputation on jeopardy. Contrary to what he said, the guy is not mentioned anywhere online and there is no company called quantum code Software Company which he claims to represent. Is this not a massive lie by Michael further proving his system is nothing but a scam? I don’t know about you but this guy should not be trusted and relied on even for a second. Wait for a minute! This guy and loser millionaire claims that he has a private jet but on a closer look this jet was hired from a company called Sunquest Executuve Aircharter located in Salem, Oregon

Further the quantum code production is loaded with fake testimonials to give it an air of legitimacy but the opposite is true and the employment of fake actors and plagiarized bank accounts is widely used. It has zero transparency and the demo shown does not really show us how the system works and instead only shows us how to fund an account and the real software is not displayed; only visuals that takes us through the visual process. The system has no associated broker and there is no where you can see any trading history with a broker. In short there is no system just fabricated presentation aimed at defrauding people.

And to sum this all up if you take a look at the so called investors results you will see that all of the images they used are just stolen from google and they put random names on them.

Conclusion From My Quantum Code Review

Right from the visiting the website and watching the video presentation I was met numerous scam instances. The annoying pop up that won’t go; bogus claims and statements, on existent software and a fake lose millionaire all point to a well-orchestrated scam. If you are looking for a genuine trading app or opportunity then you should avoid quantum code by Michael Crawford like a plague

Don’t lose all hope in making money from trading and check out my tried and tested systems in my recommended list here.

Hopefully you haven’t been caught out by the Quantum Code scam and that you have seen my review in time. Please take a minute to SHARE this post to make sure no one else is caught by Michael and his scam team.

STOP wasting your time on scam autotraders like this and learn to trade yourself with Copy Profit Share compete education and signal system.