Rip off alert: Hedge Formula Group by George Dalio is a nasty scam

Presented by George Dalio or Mike (his other name at Limitless Profits), Hedge Formula Group is a brand new  scam binary trading software and auto trader  introduced  into the market a couple of days ago. I have to warn you in advance that many people especially new day traders have already reported heavy losses and other complaints regarding this system. In this review I have uncovered damaging evidence to confirm that Hedge Formula Group by George Dalio is a dangerous and high risk binary trading bot that you should avoid by all means

My proof that Hedge Formula Group is a bizarre scam

On visiting the official page of Hedge Formula Group you will quickly notice the service is only available to “100 lucky individuals” and should you register fast will purportedly generate you $10,000 daily. These incoherent and bizarre claims by George Dalio`s video presentation do not come as a surprise since this is an old trick employed by many other similar scam services.. After going through their miserable presentation, it’s very clear the intention is to enroll as many unsuspecting people as possible. The whole crap is stuffed with misleading story line, faked screenshots and paid up actors as better testers meticulously packaged to deceive prospective members. The time frames, and the amounts don’t tally with one another and it’s even very hard to believe whether what is being promised in the video is achievable in binary trading. If you are looking for an easy way out, then Hedge Formula Group is not the answer to your prayers.

George Dalio in his sane mind starts the presentation claiming that he is exposing scammers and fake gurus. I have a feeling he has his wires crossed. I don’t know but it looks like his job was to look dumb on camera and read his lame script from a teleprompter and my job is to uncover his misdoings. If you have not realized by now George, alias Mike alias James Edwards is a paid up actor who has been featured in other scams. Not long ago he was the main character in Click Cash Formula and you can also check him out as Mike in Limitless Profits

His outrageous claim that his system has a 98% win rate is a total fallacy and devious endeavor to bend the truth. According to both expert and independent traders no trading software anywhere in the world can deliver this crazy ITM ratio and whoever promises such claims should be ignored or sued.

On further scrutiny I have sadly found out that his software which is supposed to help transform your life through pure profit is a rip off and identical to other scam software’s such as  Profit Infinity and Lie Detector Millionaire. The employment of an annoying pop up that won’t just go away is a pressure tactic intended to force you to sign up with the Hedge Formula Group.

The assertion that Hedge Formula Group manages a portfolio of around $154 million around in the world is contradictory and nonsensical .Although there is a legitimate company with the same name located in Key Biscayne, FL and headed by Richard Wilson they have no connection to this mischievous and evil service whose identity and legitimacy is in question.

Just like in other scams, the crooks behind this system have kept the tradition of employing cheap Fiverr actors to execute their evil scheme. Take for example this guy offering a testimonial about his successes with Hedge Formula group. He is a cheap Fiverr gigs seller and you can check out his image below 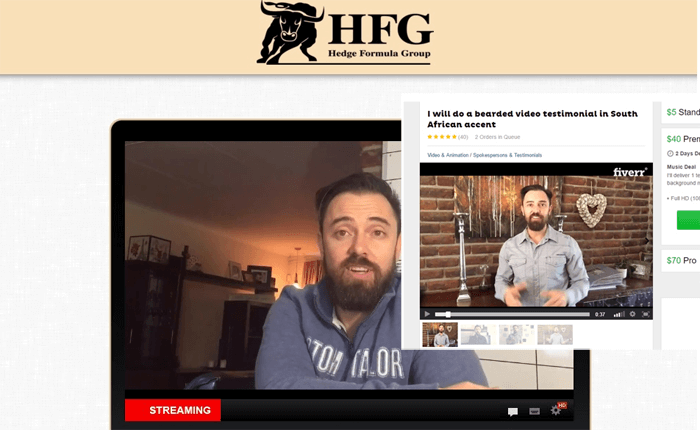 After checking out The Hedge Formula Group I have come to the conclusion that there is nothing about it that is honest, sincere or genuine about it and you will surely just lose you money. I strongly urge my readers and subscribers to keep away from this dumb software at all costs and look for other means of investing. If yur looking for something more reliable then check out my Trusted systems here.

Verdict: Hedge Formula Group by George Dalio is a nasty scam you should avoid