The Cobalt Code Review. Viral Scam by Grant Stone which is a very Convincing Scam

You just have to read my Cobalt Code review due to the massive reports of complaints being received in the binary industry of late. The Cobalt Code is currently being pushed very very hard via the social media and emails therefore don’t open any email or link associated with it until you have read my full review of this disturbing software. In my review of thecobaltcode.com and the alleged owner Grant Stone, I will uncover all the facts to prove that this is a massive fraud and con job disguised as a binary trading service

Upon visiting the official website of The Cobalt Code I was met by a young man going by the name Grant Stone, who claims to have found success trading in a mineral called Cobalt, which allegedly is mined in Madagascar, Africa. The storyline goes to say that he developed a  binary trading  app (which is very lucrative) christened the Cobalt Code and so it goes that because becoming a millionaire is normally free, Grant is giving out  this software to you for free and make anything from $12-$17 daily.

Proof Of The Cobalt Code Scam

First I have to start with  the identity of the owner Grant Stone which looks very suspicious. Clearly there is no one by that name who doubles in binary trading or cobalt for that matter. A quick search on the internet does not tell us anything about his location and contacts not even a twitter, Facebook or even LinkedIn profile. All what I can say is that Grant Stone is a fictitious character hired to execute this dirty job on behalf of his evil masters. 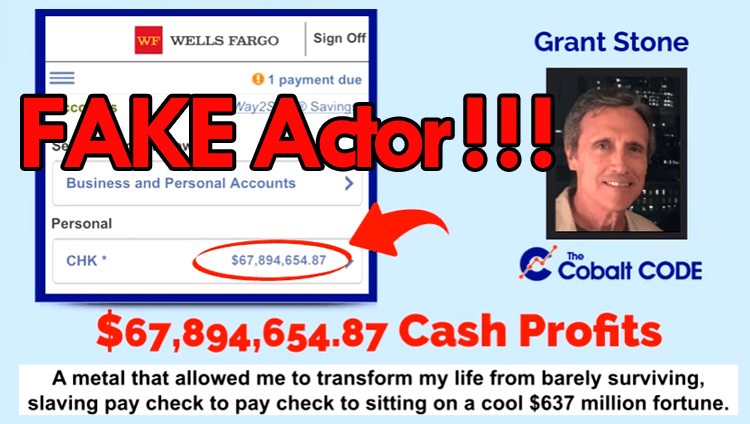 Likewise the testimonials from the beta testers are obviously photo shopped and fabricated in an effort to bring some credence and proof in another wise failed and doomed service. If you look at the image below you will see they used the same images twice but just gave the people a different name. You will also see in my video where I show the exact same people showing up with Bulgarian flags and saying they are from Bulgaria 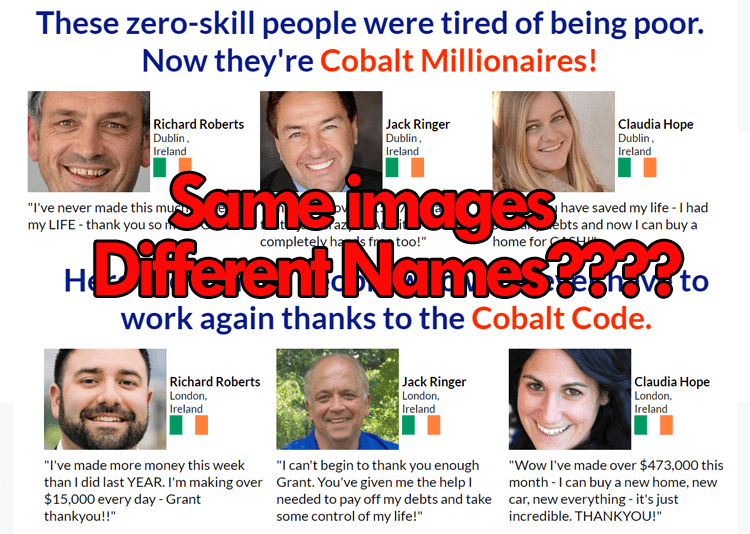 You may also recognise the guy below as a fiverr actor who we have now seen in alot of scams claiming to have made millions but yet he is still over on fiverr selling testimonials for $5. I also exposed this guy in my Hoffman Stein review.

In order to eliminate further doubts, then you need to pay closer attention to a girl found in the Cobalt Code presentation. This girl was also present in another scam that we reviewed a month ago called Disrupt Trading. This leads me to believe that the people behind the cobalt code software are the same sore loser millionaires behind disrupt trading and all what they have done is to rehash and recycle their images for new scam releases. Further if you do a quick search on who.is you will find that the cobalt code domain was only registered the other day thereby casting doubt on the numbers of years this software is claimed to have been in existence

That aside, the claims by Grant that the Cobalt Code App has been reviewed and endorsed by several major banks in the UK such as HSBC, Santander, Barclays, Bank of Scotland and Lloyds TSB are a load of bullshit. No bank will ever associate itself with a binary trading bot whose legitimacy and identity is in limbo

Sadly even the software that is supposed to make you money is shrouded in doubt and has serious flaws and authenticity issues. Although Grant claims that his software is supposed to trade in binary options this is not the case. If you register for an account you will observe that Cobalt code trades in currency and has nothing to do with Cobalt. What is seen as a live trade with money given for free is a fake trade and this money is not even real because right after the trade ,you`re  taken to a binary options broker website and you will see that your balance is one fat zero dollars. As if this is not enough Cobalt Code is clone software that is widely by scammers in scams such as NavStar trader, 7 Figure Months and Cash camp scams further proving that Cobalt Code is fraud software

Finally the claim in the presentation that only 50 positions are still left and that you need to take action very quickly to claim one is the other red flag that just can’t be ignored. Although these spots are reduced to zero as more users claimed them, a simple browser refresh, reactivates this spots back to 50 further confirming that Cobalt Code is a dirty system that is only interested in your money

Conclusion From My Cobalt Code Review

It’s only safe to say that the Cobalt Code by one Grant Stone is a dirty scam embellished and rehashed with the old tactics of scamming innocent people. Right from the fake identity of Grant Stone, fabricated testimonials, deceptive claims, scarcity tactics and 100% close resemblance to similar scams, the Cobalt Code is Cleary a scam that you should steer clear of right now.

Verdict: The Cobalt Code System by Grant Stone is a Devious Scam you need to avoid.

Before you join any system make sure its not on my scam lists here and also don’t forget to check out my list of tried and tested systems here.