Tribune XO is a new scam that is going viral in the Binary trade market. From the very first look at the promo video, a low credit one that is full of ridiculous claims and dubious details that it looks like a joke rather than a marketing video. If you are keen enough, you can easily tell that this is a scam. What’s more, the self-proclaimed owner and CEO of Tribune XO, Andrew Fisher appears to be a character hired to represent the owners of their software.

Occasionally, scams show up in binary trades markets, but this one is too straightforward and can be identified from afar. The narrator can hardly convince a person without any experience in trading to believe that it is anything real. We did a review to expose these rogue scammers, for the sake of a few traders who may fall prey.

Away from the ridiculous video done in a shoddy office that doesn’t look anything like one owned by a multi-million business, we got deeper into the details to ascertain that this is really a scam. To begin with, Andrew claims that this software can offer 94% accuracy, which is a common lie in many scams. Many traders who make it to the highest hit up to 80% and above, making it to 90% once in a while, which can only happen like once in a week. The Suspicious thing about this software is not only on making more than the normal percentage, but also its consistency.

Taking a close look at the figures, you will find something questionable in the profits being offered. It is claimed that you can make a whopping $5,000 in a day. Well, this is a reason enough to tell this is a scam without even digging any deeper, but we kept scrutinizing further. Our search landed into something more sinister but familiar, the narrator cannot justify how his software works for their clients. 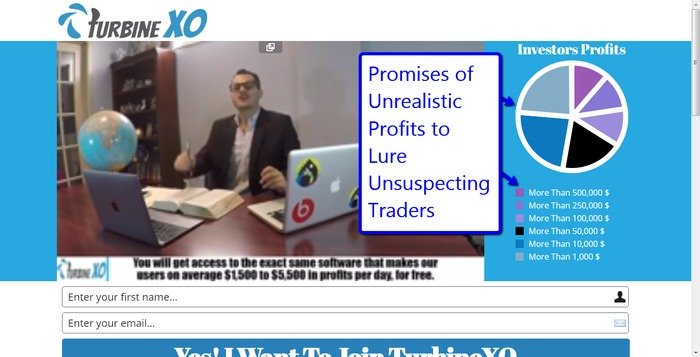 Andrew indicates that his software uses the groundbreaking Wall Street Algorithm, which he claims can give you profits in every trade. The hilarious thing about this claim is that there is nothing like Wall Street Algorithm in the first place, notwithstanding the fact that even if it were existent, it would not be possible to have an all-win streak. Making loses is norm in binary trading. We can therefore conclude that Andrew’s claims are mere fabricated lies.

They also have testimonials who claim to have used this software and made huge profits. However, upon in depth research about them, we found out that these guys are cheap hired actors for Fiverr.com, who claim to have used the software for a well long period of time. This statement is contradictory since its site’s domain indicates that it was created on June this year. Now, how long is this time these testimonials talking about?.

Who is CEO Andrew Fisher? 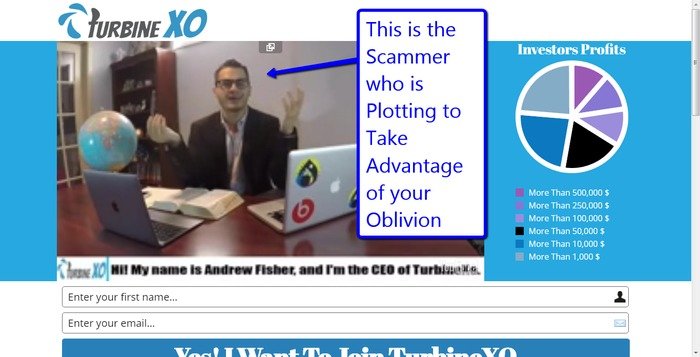 Andrew Fisher is the owner and CEO of Tribune XO, which he proposes as the way to go for any newbie who wants to get into trading without prior experience. However, this man is apparently a liar who does not own any legit trading software. The said owner of this software does not match any search online as a binary options trader, leave alone owning a platform. He appears to be fabricating lies about his proclaimed powerful software.

Is Turbine XO a Scam?

Turbine XO is a scam in every sense, from the unrealistic profits it is associated with to the success rate tagged on this software, you can conclude that this is a scam. The big names these rogue scammers are using are just deceptions to lure you into believing that this is real and legit software. It is normal for scammers to bombard you with silly jargons and identify themselves with big businesses and this scam seems to largely portray the same character.

From our intensive research, we have found out about this is a just another cheap scam out there. Therefore, we can confidently declare it a rogue trick by bogus scammers who want to take advantage of unsuspecting and inexperienced traders. Turbine XO is a simple attempt to play foul by people who seem incompetent enough to disguise their lies. The unfortunate thing is that there are people who may have already given in to these lies.

Verdict: Turbine XO is a Scam you should steer well clear

Just like the recent scams called The Orion Code, Zeus 2 and the Automata Formula this is another scam I hope you haven’t been caught by. As always if you are on the look out for a system that has worked for me personally then check out my Trusted System List which lists the few that have actually made money for me.