Wealth Crew is one of the new kids on the binary options block. Unfortunately just like its predecessors, the Wealth Crew system has proven to be nothing more than a scam. Thing is that the owners lie that this software has the capability of earning high returns but none of that ever happens. There are plenty of reviews online by traders giving negative remarks about the software and warning others to stay away from it. The signs that this scam is oozing are dreaded by many as signs of a swindle.

The software is co-owned by one Nathan Schmidt. He says that this auto-trading system is quite popular and has even been featured on the Wall Street Journal and CNN. He also claims that this system has already been earning its over 13,000 members $4k every week. All they do is win and win thanks to the software’s accuracy ratio of 91.2%. And guess what, there is no losing because losses can be reverted into profits. Nathan also mentions the likes of John Thain the CEO of Meryll Lynch, George Soros, Lloyd Blankfein the CEO of Goldman Sachs when talking about his software.

The Wealth Crew scam is dangerous and you should not deposit your money in it. The video is indeed persuasive but that is the purpose it serves; to get you signing up and depositing. All possible means will be used including a free trial period.

Wealth Crew system is on full automation and so all you need to do is just c lick the button. We are promised that it is a program developed by the best brains in finance and programming. We are even told that this is a program that works with robots or bots instead it is a caucus of the best traders globally who do the trading for you.

The program will analyse the market before it makes a move unfortunately this information cannot be validated from images of people stolen from the net and as much as we are told that it gives 140 signals yet in the video goes down by 20 just goes to show that this is a huge mess.

We do not know who created this software; we just know the supposed number two.

Proof that Wealth Crew is a Scam

This is a 100% honest Wealth Crew Scam review and we have all the evidence depicting that this is a scam. There is no profit to be made. First and foremost the real owners do not want to be known. After all isn’t that why we only see an image of the supposed Nathan and then a voice over follows?

Things are not adding up in terms of how the software works. One moment it is not a robotic auto trader, next minute we are told all it takes is a click of a button. Is this not how auto traders work? Now we are told that the Wealth Crew system failed 1000 times before it became a success. 1000 failures is a sign that you should stay away furthermore you are dealing with people who are clueless when it comes to binary options.

The first 5k users will get the software free of charge. This is still the same tactic used by other scams where they make you think that you are the only one in your entire city who is missing out. Do not fall for this kind of intimidation. Nathan and his team are being pushy, hold on tight to your money and don’t dare give in.

Another is this, if the guys at Wealth Crew want to take binary trading to everyone then question is why only limit your software to 5,000 people? I mean if you want to turn lives around, then you should not be limited. Well this is another pushy sales tactic to get people signing up thanks to the band wagon propaganda at work. The aim is to depict scarcity so that people are fooled.

According to Who.is the Wealth Crew domain has been active since 8th August 2016. So where and when did 13,000 users emanate from? Furthermore a thousand failures were mentioned so when did they occur if you are just one month old? 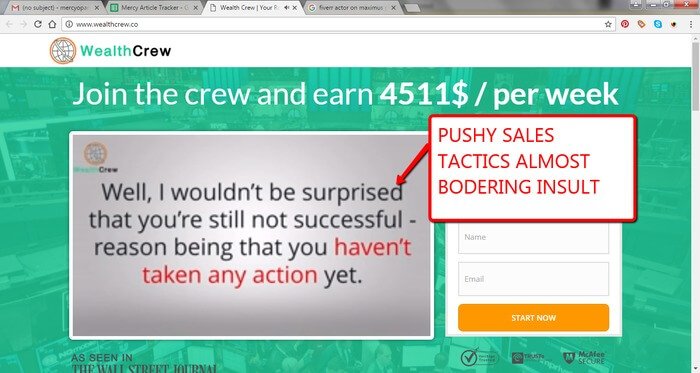 From the video, it is easy to see that the guys behind this system are smart scammers who know the strings to pull. Unfortunately for them, the devil is in the details and their lies expose them for who they really are.

Verdict: Wealth Crew Review says this is a BIG Scam

Scammers come dressed like financial saviors but after they get your money, you will never get it back. They promise you heaven but when the deal is too good to be true, think twice. Wealth Crew system is a scam. Make sure you always check my Trusted List before joining any Binary Options System.