Be Warned! Zero Loss Formula Is A Bogus And Pitiful Loser Scam

Be warned that zero loss formula trading app by a guy called Peter Morgan is serial scam  that is causing dangerous losses an financial nightmares amongst users who have tried it.In my zero loss formula review I had unearthed several features that without a doubt will shame this moron, Peter Morgan and his fake software in a way that will leave you with no doubt  regarding its intentions to scam unsuspecting members of the public. By all means the zero loss formula software is a lethal and a dangerous piece of  code shit designed to confuse and victimize you. Please read on my blow by blow account of how this high end heist serves as  an old textbook example of how these crafty morons scam would be traders  and split profits with unregulated and rogue offshore brokers

Right below is a picture of Peter Morgan ,the alleged owner and founder of zero loss formula  deceitfully seating in an office setting taking you through a familiar sales script  and spitting the same old concepts of making dreamy amounts of money in a very boring and repetitious manner 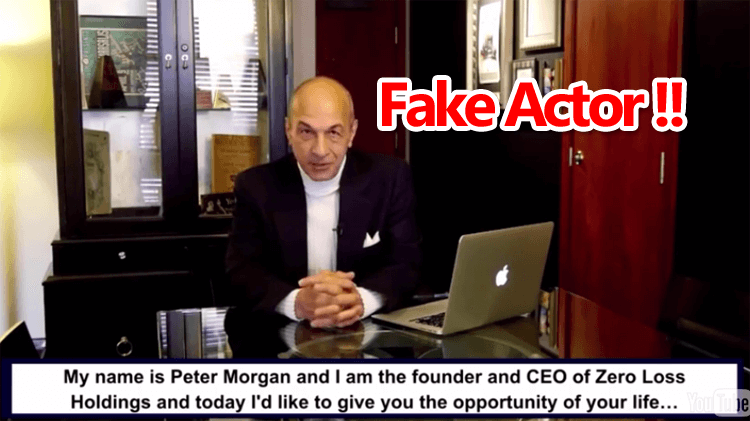 Its apparent this moron has lost quite some pounds since a few  months ago he debuted in a very lethal scam, by the name hedge formula group, oh look at how the word formula is used in both apps!!Hedge formula is one app that I reviewed and blacklisted right here a few months ago and its no brainer  the people behind it are the same guys promoting zero loss scam

I`m sure you have already seen the so called amazing reviews and testimonials on how the app has made a few chosen individuals millionaires in a very short amount of time. The sad truth is that all these testimonials  have been bought cheaply from an online marketplace called fiverr.com and it appears these testimonial actors are fast becoming a favorite of  scammers, going by the number of times they have been hired to lie infront of a camera. These guys can practically be hired  to say anything for a measly $5.

Another damning fact that I discovered to prove that zero loss formula is a scandal concerns the owner ,peter Morgan. Throughout the presentation peter Morgan claims to be the founder of and owner of a company called zero loss holdings, the firm behind the app but the truth is that there is no company by that name. A search on the internet does not reveal a company by that name anywhere and there are no details  to prove otherwise. Even though peter claims that they have been in existence for sometime without losing a trade,the  domain for this loser software was only registered a few weeks ago  further confirming that  this app  and company does not exist.

Another red flag that confirms that zero loss formula is indeed a scam pertains to the claims on the amount of money that you can make with this app. There is no way you are going to make $200 to 1k daily on a single trade, not with the $250 deposit so just don’t be fooled. Likewise you should be aware that there does not exist a software with a zero loss guarantee. Seasoned binary trading experts all warn that such statements and claims are all fabricated and fashioned to lure people into believing that zero loss is a legitimate and reliable service but the contrary is true

Conclusion From My Zero Loss Formula

Its very clear from the start zero loss is a fabricated and rehashed scam, complete with a cast of fake owner ,fake company, rehashed app, paid fiverr testimonials and other scam maneuvers. There is nothing to suggest that you will make money with this app or get any help or support from Peter Morgan plus you risk getting your account locked up the moment you deposit any money with their shady brokers. Stay safe .Stay away from zero loss formula

Verdict: Zero loss formula is  a loser formula app you need to avoid

The binary options inductry is full of scams but not everything is bad. I have had success with a few a few systems which are listed on my trusted signals page here. If you are looking for a broker make sure you also check out my trusted broker list here