Zeus 2 is a new scam that is already going viral in the Binary trading market. This dirty scam has been masked with lies to appear as real trading software that can help you win millions of dollars in days. There is no reality in what the scammer in the promo video is saying; just a bunch of fabricated lies and false promises. We decided to unearth the hidden dark side of this software and expose the lies for the sake of traders who might not be aware of the sad fact that this is not a legit system.

To begin with, you may suspect what Mathew Harrison, who is the owner and CEO of this company is promising to offer. He emphasizes that with joining his team and using his software, you will make $1 million in a matter of days. It is claimed that you can make $10,000 per day and $605 per hour trading with the Zeus 2 software. However, this is impossible in binary options trading, which means it is just another trick by this bogus scammer to convince you there is a great deal to reap.

In more than one instance, Mr Harrison tells us about how he spent a lot of money to fund the development of this software. He keeps on rotating around the same fluff throughout the lengthy video. However, you will notice that he is not telling us anything substantial about how his software operates, which he should have explained in detail.

Another indicator of just how rogue this person is, is evident where he goes on to anchor his system’s secret success to bare metal servers technology that makes it super fast and convenient. However, this is a common technology in today’s world; hence, there is nothing so special about it at all. Also in his website, it is purported that this software is so reliable it can beat the odds in trading to give you profits even when your trades turn down. If he has such effective software, then there is no point in spending so long trying to market it while he could just show users how it works and let its effectiveness sell it out. 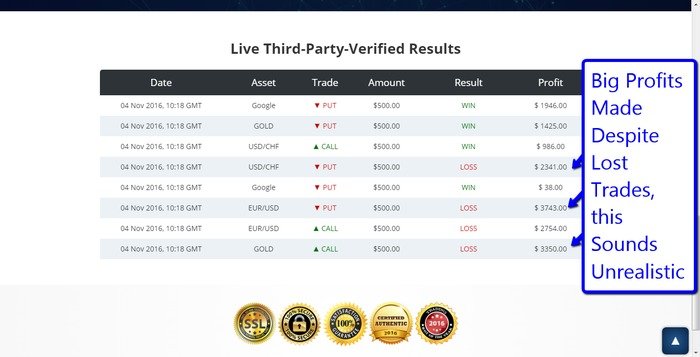 The most hilarious thing about his claim, like in many of the scams that show up every other day in binary trade markets, is the means this scammer uses to affirm his claims. The testimonials that presented here are also false. The images used are stock photos, displayed to convince you that there is anything real about the lies these scammer is bugging you with, which of course do not add up at all. Even more sinister is the figures on the testimonials displayed on the website. It is clear that three different people are making exact similar profits, both in daily profits ($1246.31) and in overall profits of ($14955.72). This is yet another fact, which points out that Zeus 2 is nothing but a rogue scheme to manipulate viewers. 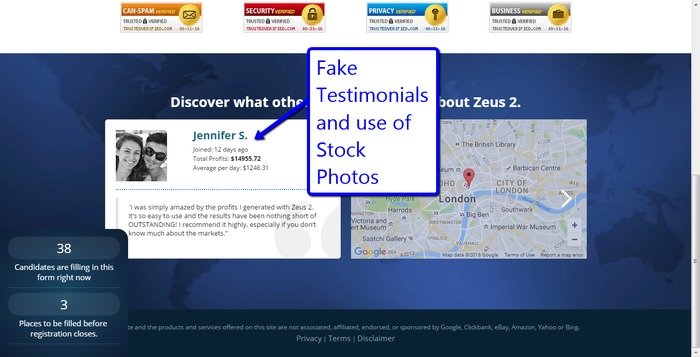 Who is The CEO Mathew Harrison? 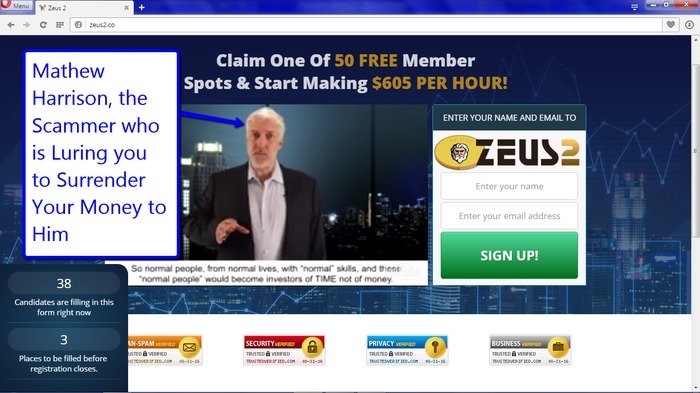 Mathew Harrison is the owner and CEO of Zeus 2, who claims to be a wealthy person with a reputation of success back in Wall Street. He claims to have spent millions of money developing software that can outsmart other auto trading systems to make great profits. However, this is a big liar with nothing to offer other than his deceptive claims.

Yes, Zeus 2 is nothing but an ugly scam that is presented to users in lies and promises that are unrealistic and pointless. Furthermore, the use of normal pushy salesmanship tactics is clearly displayed on the website. All these are indications that this is just a cheap ploy by Mathew Harrison and his team to scam inexperienced and unsuspecting traders. Other viral scams to avoid are the Orion Code and Automata Formula.

From what we have discovered about the said Mathew Harrison’s software, we can conclude that this is not a straightforward system. There are very many peculiar issues surrounding the presentation and the information provided to back it up. One can’t help but mark this as a wicked plan by some bogus liars out there, who are targeting binary traders. Therefore, we declare without a doubt that Zeus 2 is nothing better than a fraud, orchestrated to delude traders to give away their hard-earned money.

Verdict: Zeus 2 is a scam and should be avoided as plague.

It can be very disheartening seeing all these scams but from time to time I do find some good money makers which I always list on my Trusted System List.

If you ever have any questions just let me know.